Home>Posts>PRESS RELEASE: Cannabis Legalisation Back in Pretoria High Court – The Trial Of The Plant 2
Previous
Next 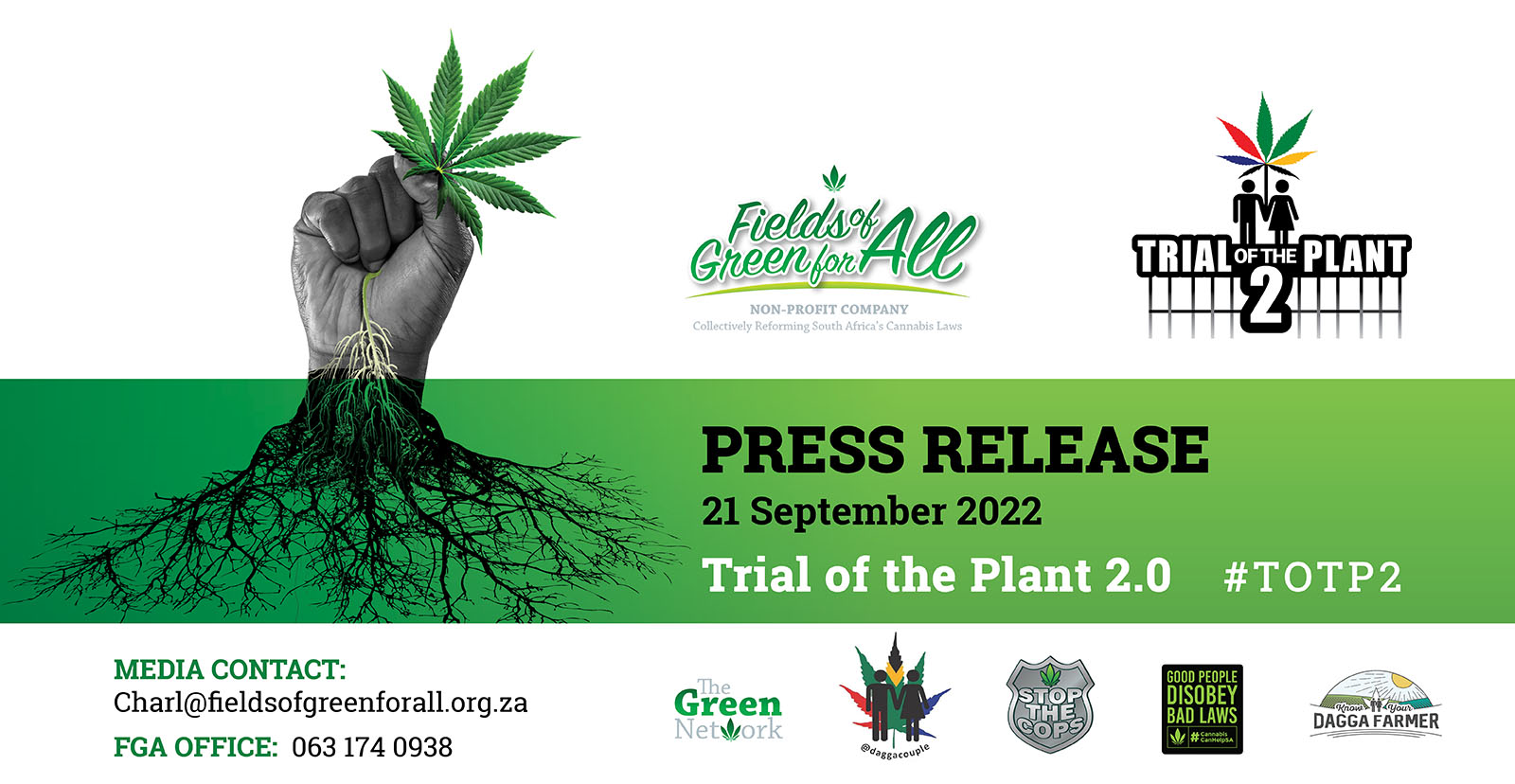 In 2017, three plaintiffs (Julian Stobbs, Myrtle Clarke, and Clifford Thorp) met seven government departments (“the state parties”) and the intervening Doctors for Life (“DFL”) in the Pretoria High Court for the commencement of the Trial of the Plant (the “TOTP”). After days of evidence, the TOTP was rendered part-heard because of the state parties and DFL ambushing us with many thousands of pages of evidence, which, upon later analysis, supported far more than it hurt us.

We went on to intervene at the level of the Constitutional Court in the consolidated cases brought by Ras Gareth Prince, Jeremy Acton, and others, which culminated in the 2018 Judgment that saw the effective decriminalisation of the personal and private use, possession and cultivation of Cannabis in South Africa and which afforded our Parliament two-years to replace the legislation struck-out as being unconstitutional. Then, we waited.

In the background, since 2014, Fields of Green for ALL NPC has been assisting Cannabis users, cultivators and traders to get stays in prosecution pending the outcome of the TOTP. There are now over 100 cases waiting in the queue with Myrtle.

Four years have now passed since the 2018 Judgement (as have, tragically, the lives of both Stobbs and Thorp) but we feel no closer to a reasonably regulated trade in South African Cannabis than we were back in 2017, when fighting the TOTP. There are now calls for an ‘evidence-based’ policy and, despite it being the constitutional responsibility of the state parties to evidence the harms that they allege that they want to protect us from, it seems obvious to us that we need to drag the prohibitionists amongst us back to Court if we are to get us over the line anytime soon.

So, today, off the back of last week’s mass action, we announce the launch of the Trial of the Plant 2.0 (the “TOTP2”) – being the re-opening and continuation of the original TOTP. We will be meeting with our lawyers from Cullinan and Associates and narrowing our challenge so as to not fight over territory already gained. Our focus, fundamentally, will be to ensure that anyone who wishes to is allowed to earn a living through Cannabis, as so many are hypocritically permitted to do through the cultivation of and trade in everything related to alcohol and tobacco. In addition, we plan to eliminate some of the rats and mice left behind by the 2018 Judgment – which seemingly provide quarter to the state parties and their agents to trample on our hard-won human rights.

We cannot do this alone. Only through generous donations (both of money and expertise) were we able to get as far as we did in 2017 and 2018. Back then, many didn’t take us seriously, but now they know what’s possible and that we’re their best bet. It’s time to treat the funding of this final push as a strategic investment. Spending a little now will help us to unlock the full potential of a sunrise industry, in which there will be space for you, your business and the businesses of your compatriots. Help us to help you – we are stronger together.

More information will follow by way of updates as this all unfolds. #TOTP2. Watch this space.

A personal note from Myrtle Clarke:

“Since the devastating events of the early hours of 03 July 2020, there has been no investigation into Julian’s murder. There remain 2 pieces of paper in his file at the Diepsloot Police Station and those pages are my statement. Yet, the South African Police Service continues to harass, profile, arrest, incarcerate and extort members of our peaceful Cannabis Community. Enough is enough.”