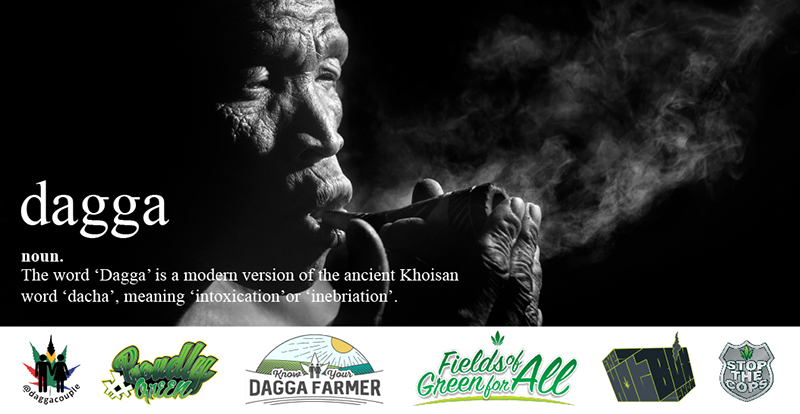 The word ‘Dagga’ originates from an old Khoi word ‘dacha’ which was originally their name for leonotis leonurus, so called Rooi dagga, Wilde dagga or Klipdagga which was smoked by the Khoikhoi in the same way as tobacco.

There appears to be confusion in the early literature between Cannabis and Leonotis leonurus. It appears that ‘daccha’ was the generally adopted term of all narcotics – both smoked and chewed.

The word has been recorded from the 17th century with at least 10 different spellings:

All of them trying hard to spell a Khoi word.

In modern times this word was ‘modified’ in the 1940’s by the ruling party in such a way that the phonetic “Ga!”, an expression of disgust in Afrikaans, was incorporated into the word for its emotional effect.

Since then this word has been used by the South African Police Service and the media to stigmatise the plant and the people who use it. The word ‘Dagga’ is presently not something said in polite conversation. When the word is spoken out loud, many people look fearfully over their shoulder to see if there is a policeman listening in.

The word “Dagga” is thus a highly sensitive and stigmatised word in South Africa and reactions to this word range widely from disgust, anger and censure to hysterical laughter and emotional release.

We use the word ‘Dagga’ instead of Cannabis because most South Africans don’t relate emotionally to the scientific word Cannabis or even know that Dagga is Cannabis Sativa.

The linguistics are discussed in some detail in the following publications:

From Rituals To Rapture to Dependance gordon1996