404 Courier Policies and the SAPS

Home>Posts>404 Courier Policies and the SAPS
Previous
Next

404 Courier Policies and the SAPS 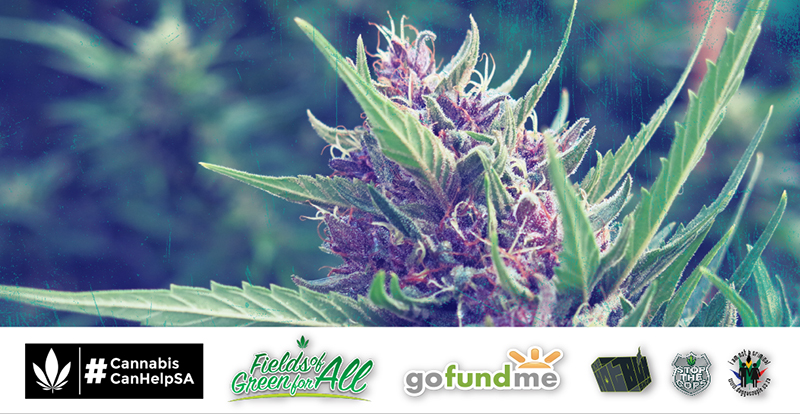 We often get contacted by folks that had their weed parcels confiscated for no reason. This leaves us wondering why, considering that more dangerous substances like alcohol and tobacco never get seized. We even published a blogpost about the issue a few weeks ago. The majority of cases ask for their Dagga back or if they don’t know their rights, they just leave it be.  This week a lady bugged a leading courier for her confiscated weed that she sent to a family member (along with other gifts) and finally got given a case nr and was told that customs handed her parcel to constable Kwandabila at the Milnerton police station.

She intended to go and attempt to claim it back, but when she called the station they told her the Dagga was destroyed, seemingly along with the gifts in the parcel. By law, which is clearly stated in the police directive, the police have to return your Dagga (NOT destroy your property) if you cannot be found guilty of dealing. She was told the police captain will contact her about the matter, but to date he has not called. She recorded all calls with the courier and police in case legal action is needed, but she cannot afford a lawyer. She tried to contact the courier through their facebook page support, but that was another dead end. She has screenshots of this conversation also.

So what is the general policy at couriers about posting Cannabis? There appears to be none around. She also went onto the courier’s website and clicked on the Cannabis policy clause to find out more. It lead to this 404 error page (image below). She recorded all her calls and are well within her rights to use legal help to claim her stolen items back, but that would cost more than the loss. One would expect the courier to reimburse her for her stolen goods from their insurance and learn their lesson about police theft and corruption, but it seems they prefer to remain vague or in cahoots with corrupt police. 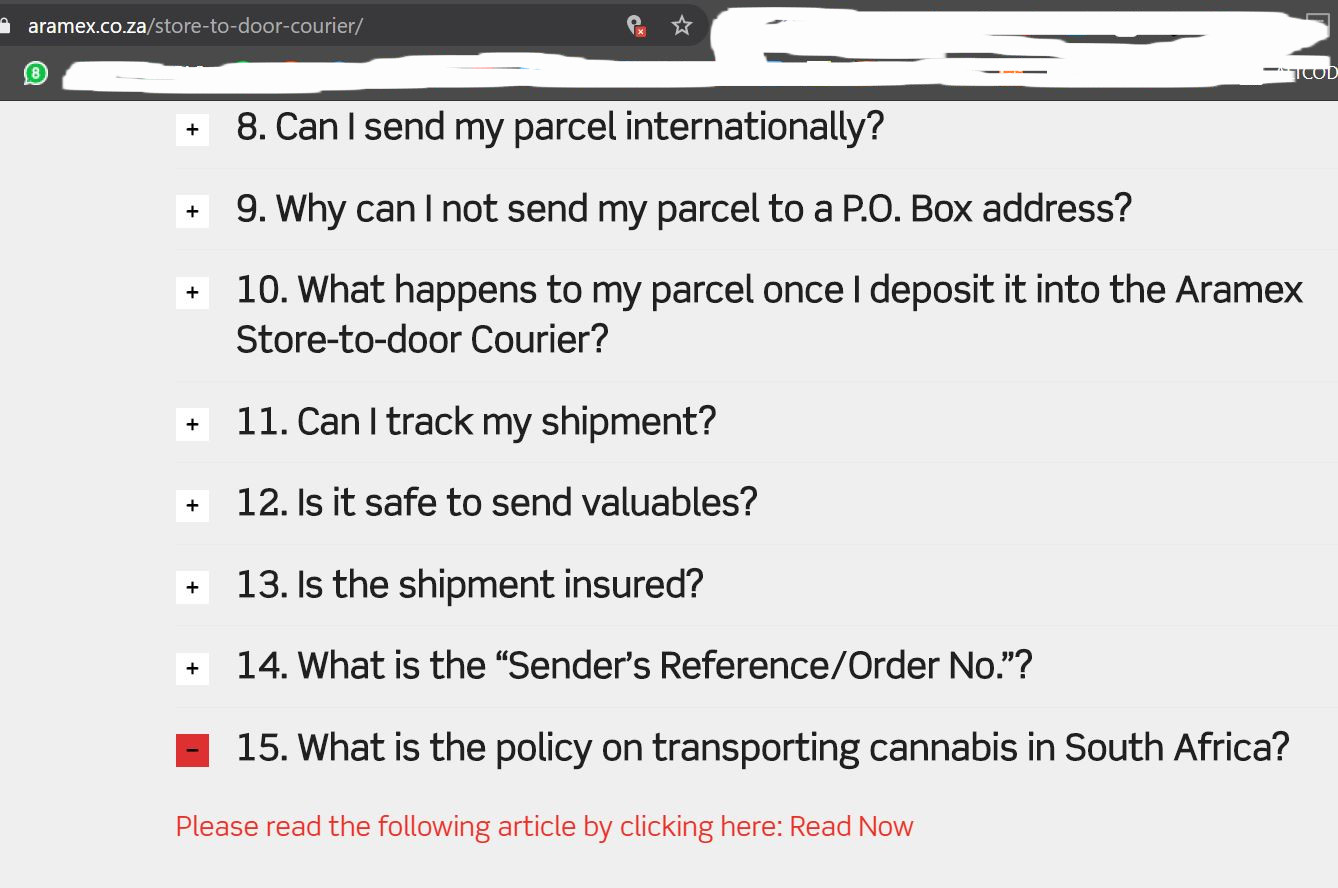 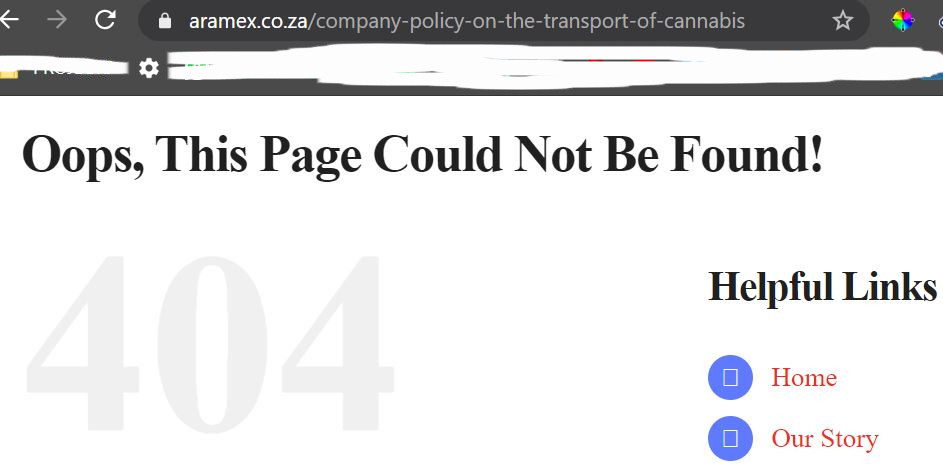 In reality there are no regulations or clauses in the law that condones or prohibits the posting of Dagga. There’s not even a mention of mailing in the controversial proposed Cannabis for Private Purposes bill which also shockingly neglects any regulations around the safety of children. This opens up a giant can of worms and one of the most glaring grey areas when it comes to Cannabis regulation in South Africa. The police directive (that the police themselves evidently have not read yet) even allowed us to fly nationally with our favourite plant and at the same time the postal system in Canada, that allowed Cannabis by mail even before main street dispensaries, are enjoying the extra revenue. One mail service was even saved from bankruptcy.

There is nothing in our law that prevents our couriers from allowing a similar system here in South Africa. Members of the many dagga private and grow clubs that live too far to collect their Dagga also have it posted to them. Why would a courier intercept some of it, deter business and thereby shoot yourself in the foot? These confiscated (or stolen) parcels are knee jerk acts that stem from false fear and prohibitionist misinformation. This is frankly unnecessary, embarrassing and shameful behavior from couriers, customs and the police. They have NO REGULATION to fall back on to justify their shifty behavior or to punish the public for something they themselves are openly unclear on.

So why don’t the couriers in South Africa that don’t want the people to post Dagga just come forward with decisive policy that states things clearly? Because couriers are also at a crossroad where they have to decide to remain silent or openly be against posting Dagga. Should they exclude themselves from an imminent giant economic opportunity that may arise the moment trade in Dagga is allowed in South Africa? At that moment no courier wants to be the black sheep of the Cannabis market. This is also why nobody as far as we are aware has had legal action taken against them for posting weed. After all that would be silly and reflect bad on the courier, not civil society.

The smaller couriers that don’t mind karting Dagga around are the all out winners here, and the ones that prefer to remain silent on the issue, but that shroud instances like the one above in a missing parcels confusion with the police and cloak and dagger phone tennis with fear mongering and confused customer support, are steadily staining their names in our future industry.

Here is what the victim told us in her own words:

[The parcel contained two packs of collectable cards, an old rare book, and some other goodies; and two (Max 4g) bankies. One marked ‘pain’ and one indicating daytime use. I also sent a few seeds from my personal strain which is particularly irritating.] The night I decided to pop the weed in, I checked on their site and the link re Cannabis policy was a 404 “Page Not Found” Yesterday I checked it again, it was blank.(Screenshot)

The parcel did not arrive and they did not contact me so after a week i inquired after the parcel to be told that the parcel had been ‘picked up by SAPS” but in the same conversation was told it had been sent back to Cape Town because it had been “snifffed out” by their ‘in house’ dogs. (which I hope are well kept and cared for and not living in cramped security hutches).

Anyhow – after consulting with three different legal peeps, I requested the details of the case from them telephonically.(audio rec)

At the same time I chatted to the courier’s international page on FB, as well as their local FB page, and requested the details.( as they obviously required some pressure to respond).

I received a miss call and an sms from them the following morning of the 10/11/2020. The sms reads: Dear Client, case number as requested: Cst Kwandabila – SAP xx /xxxx/2020 – the parcel is currently at the Milnerton Police Station,

I called the station (audio) – unfortunately the recording cutoff midway)

That is where I am with this. I don’t want to spend time in police stations and courts. I had my experiences on the streets of Durban in the 70s/80s, and am still traumatized as is most of our population.

So where are my belongings? I have been stolen from by the courier and SAPS, and there is apparently a case number against me. Seems so unjust and effing surreal.

Anyhow this is obviously confidential and I am obviously ranting at this point .

FYI When I called the police station I was not put through to the officer I requested. The lady I spoke to told me that it had been destroyed and there was nothing else in the parcel. he said this is their policy.

She said her captain would call me, and ended the call while I was speaking.

I have not been able to find out what I am charged with or what i am supposed to do to get my property back. ( audio)