Fields of Green for ALL’s Video Submission in Vienna

Fields of Green for ALL’s Video Submission in Vienna 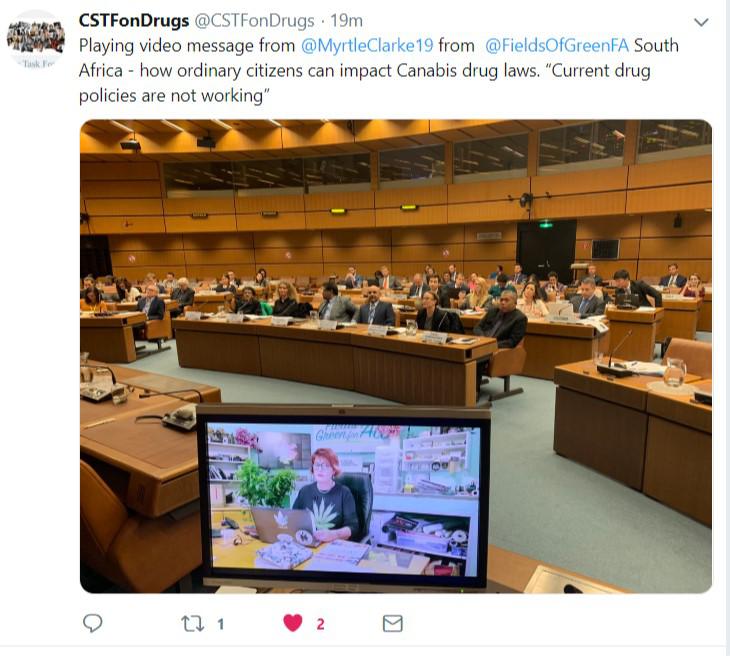 During January the Civil Society Task Force on Drugs, which is the go-between organisation for us mere mortals and the United Nations, put out  call for submissions from grass roots organisations around the world under the heading “Voices of Civil Society: Beyond 2019.”

This was in order to support preparations for the 2019 Ministerial Segment (UN Member States all have representatives) to be held at the 62nd Session of Commission on Narcotic Drugs in Vienna in March. Global Civil Society Hearings were held in New York (February 20) and Vienna (February 26). These forums served to update member states on the full results of the Global Civil Society Consultation on Drugs (we contributed to this consultation), as well as providing valuable space for civil society experts from around the world to present their work.

Fields of Green for ALL submitted the following abstract from South Africa and we were chosen to send a video:

The future has already arrived in South Africa. Despite the UN Conventions prohibiting countries from regulating the responsible adult use of Cannabis, our non-profit company has fought a long & hard battle in court for the legal regulation of Cannabis. In September 2018 we won part of the battle when the Constitutional Court decriminalised   the personal use, cultivation & possession of Cannabis within private spaces. This decision trumps any international conventions but leaves civil society with challenges when it comes to the upcoming amendments to the law. We are aware of our human rights within the framework of the sustainable development goals put forward by the UN but there is a grave danger that the majority of our population will be left out when our government, inevitably, regulates trade in Cannabis. We wish to use the various UN developments & treaties in the human rights sector to create a foundation for inclusive development of a commercial Cannabis sector in Southern Africa &, in doing so, strive to bridge the gap between the UN & the people on the ground.

You can watch our video HERE and it is very interesting to look at the various submissions from NGOs around the world, showcased in both New York and Vienna and uploaded to the United Nations Office of Drugs & Crime (UNODC) website .

We would like to assure all of our supporters that we will not give up tackling the issues that face us with the prospect of legally regulated  Cannabis in our country – from the most remote rural villages to the pompous halls of the UN. Thanks for all the support that keeps us going in these crazy times.