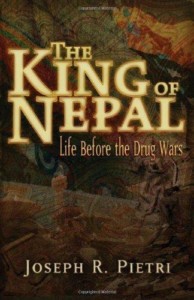 A recent visit to South Africa by The King of Nepal has inspired us to resurrect our Bookshelf on the Fields of Green for ALL website. We will be republishing reviews of old favourites and adding new ones each week with our newsletter.

So many of us can’t even imagine what life was like “before the drug wars” and we recommend the adventures of expert grower  Joseph R. Pietri as an excellent adventure into a crazy time in the history of Cannabis. Join him on a spiritual journey from Europe to India during which he explores a plethora of interesting aspects of the Cannabis plant. Find out why drug smugglers and doctors alike say that Cannabis is, indeed, the goose that lays the golden egg. This edition is richly illustrated with numerous photos and media clippings. No matter what your interest is in the Cannabis plant, Joseph R. Pietri has an amazing story to tell.

From the halcyon days of easily accessible drugs to years of government intervention and a surging black market, this tale chronicles a former drug smuggler’s 50-year career in the drug trade, its evolution into a multi billion-dollar business, and the characters he met along the way. The journey begins with the infamous Hippie Hash trail that led from London and Amsterdam overland to Nepal where, prior to the early 1970s, hashish was legal and smoked freely in Nepal, India, Afghanistan, and Laos; marijuana and opium were sold openly in Hindu temples in India and much of Asia; and cannabis was widely cultivated in Nepal and Afghanistan for use in food, medicine, and cloth. In documenting the stark contrasts of the ensuing years, the narrative examines the impact of the financial incentives awarded by international institutions such as the U.S. government to outlaw the cultivation of cannabis in Nepal and Afghanistan and to make hashish and opium illegal in Turkey—the demise of the U.S. “good old boy” dope network, the eruption of a violent criminal society, and the birth of a global black market for hard drugs—as well as the schemes smugglers employed to get around customs agents and various regulations. – available from Amazon.