By Charl Henning|Published On: November 2nd, 2021| 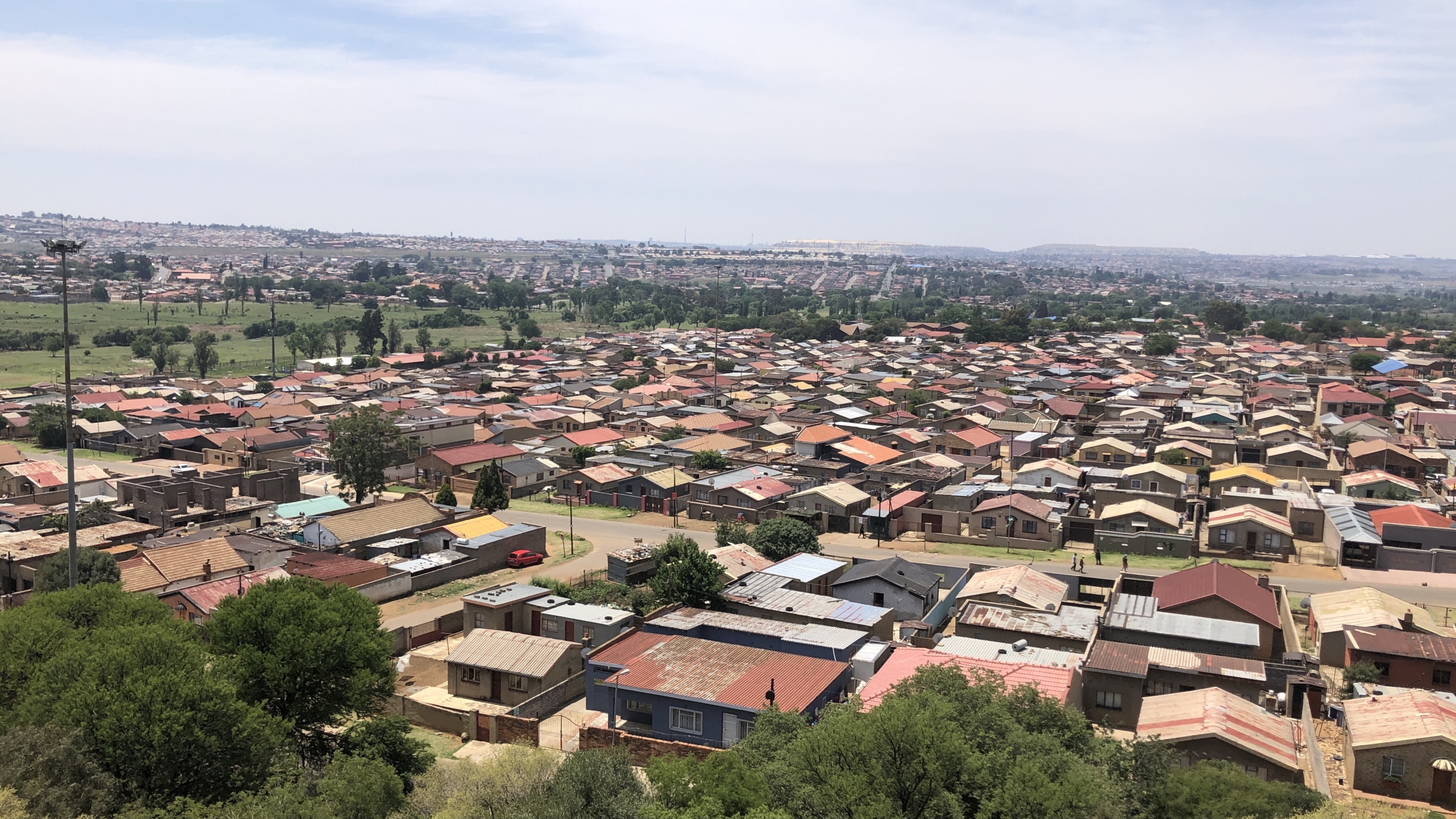 On a warm spring day in October I went to Soweto with Myrtle and my colleagues from the #Hotboxshow to interview some local Cannabis enthusiasts about their Cannabis use and cultivation in the township. Our day started at Credo Mutwa Cultural Village where we met with some enthusiastic young men who kindly allowed us into their homes so we can see for ourselves what life is like for the majority of South African Cannabis users and cultivators.

What became clear to me very quickly was that township residents enjoy hardly any “privacy” at all. Shacks and houses are nestled tightly together and the residential sprawl goes on for kilometres, housing nearly two million South Africans, about 3% of our entire population. Less than 10% of adults here have a higher education. In the area where we found ourselves there were almost no gardens in sight except for the odd half a metre of pavement here and there where a bit of earth allowed for a few decorative plants or some lawn. 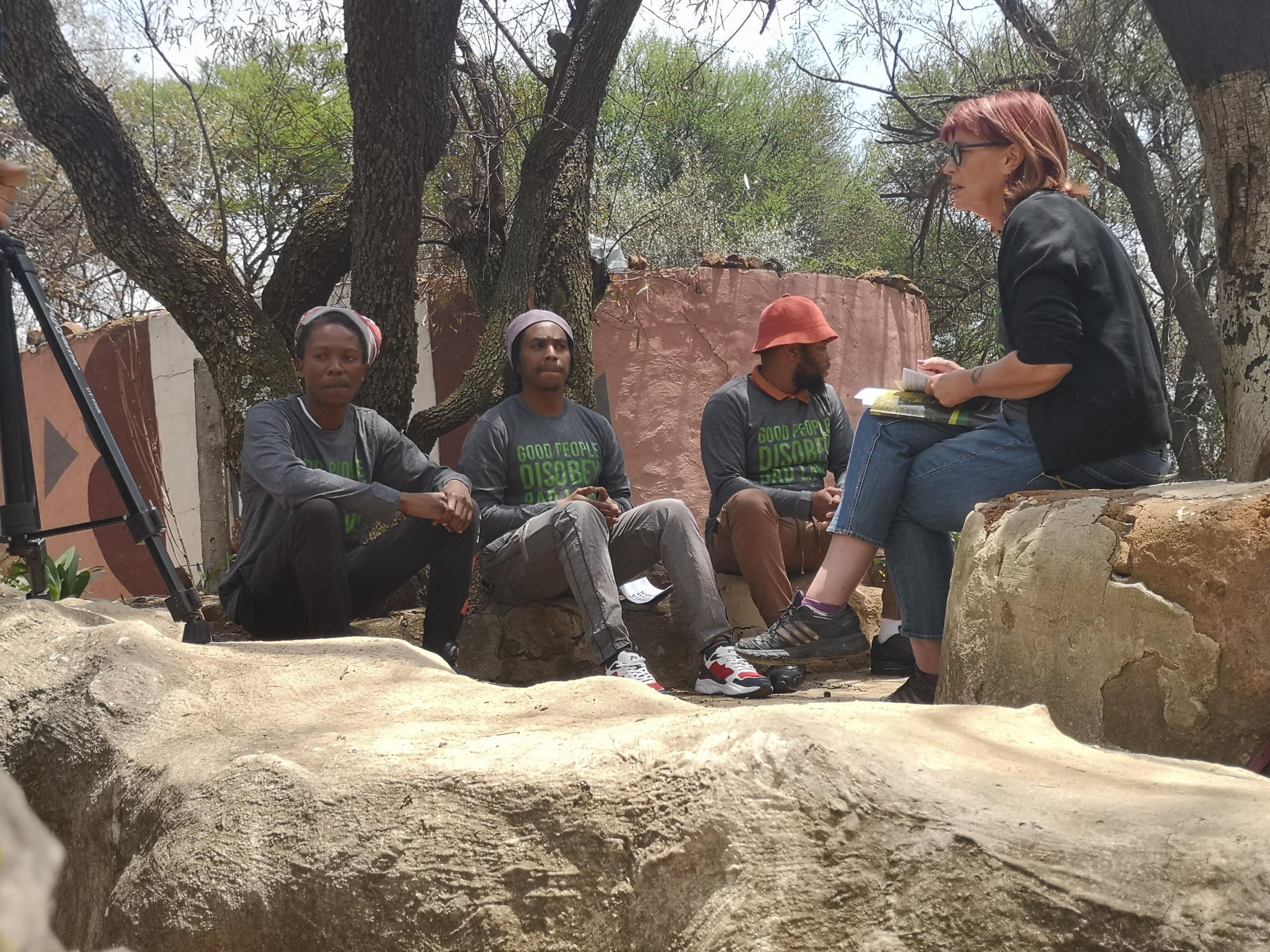 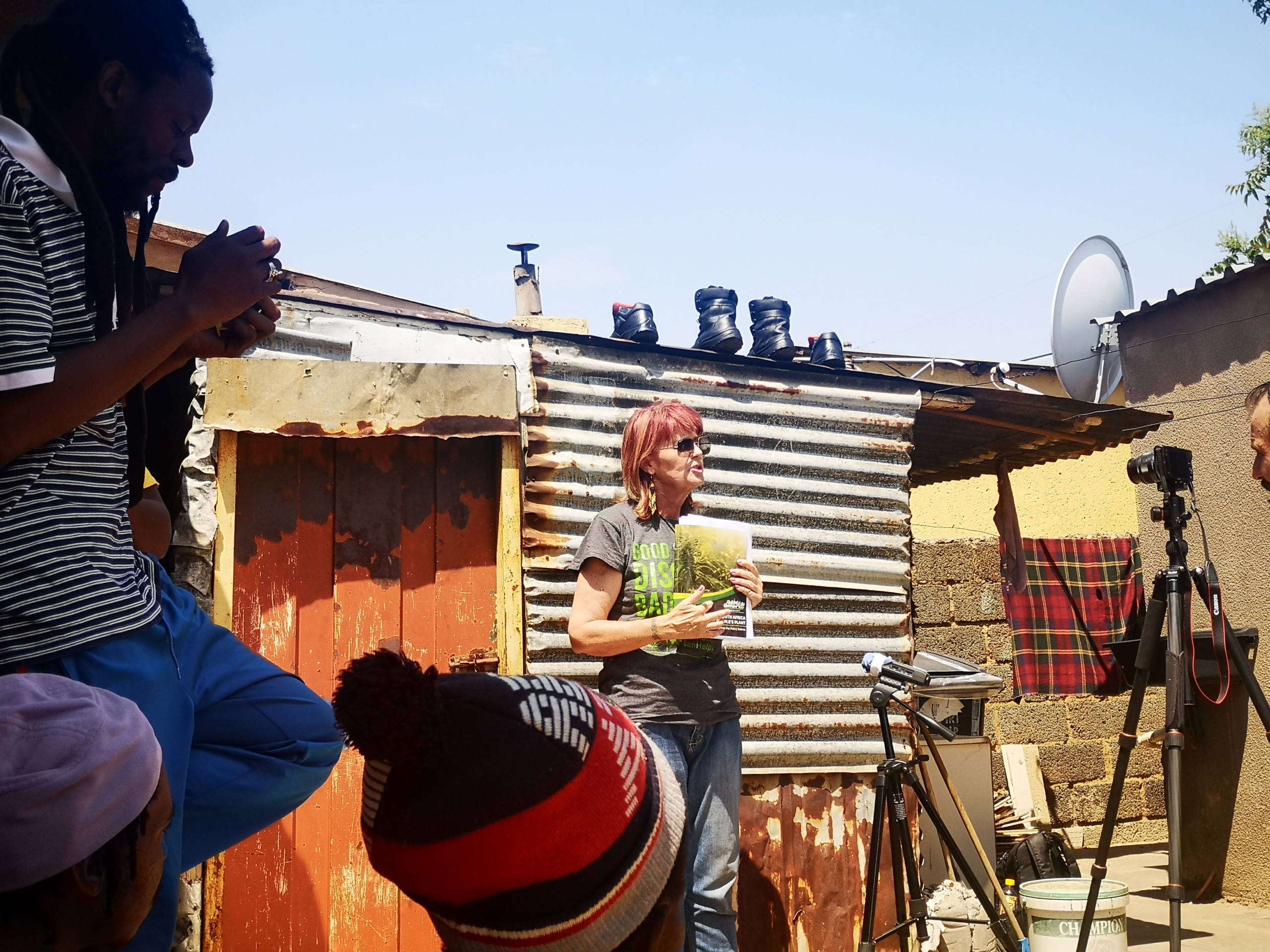 Concrete slab yards are the norm, as it is easy to clean and keeps the dust and mud contained. Living is very communal and many people sharing one property is also the norm. Many plots contain more than one backyard shack on one property with thin concrete walls separating one property from the next.

The men explained to us in detail how they have trouble growing anything. The bits of soil we saw in the yards were full of rocks and very little grew there. After all, most of Soweto was built on mine dumps so in many parts the soil is near worthless for growing food, let alone Cannabis.

Soweto residents have very little “privacy” and it is nearly impossible to grow anything that will not be visible to neighbours or passers by. That is if you are lucky enough to even own a patch of earth. Residents say that the police will still invade your home and arrest you for Dagga, regardless of the quantity. Even one bag or plant is enough to get you into serious trouble – arrest, incarceration and the loss of your plants or stored Dagga.

From what our fellow activists told us, it is also not possible to grow indoor Dagga because both electricity and water is expensive and often both are cut off for several days at a time. Only about half of households here have running water. Just one or two days with no water or light can ruin or destroy your plants.

One of the men, Thabo, told us that residents that are lucky enough to have employment have to travel long hours just to get to work, and buying your weed in a bag is the norm as most folks do not have the time or means to grow their own. However, alcohol, which is a huge problem in society is readily available and every block has a “shebeen” or tavern.

Some members of our Cannabis Community in Soweto try to grow “bag seed” – the seed that comes with (mostly low or average quality) Dagga “trafficked” from other provinces or neighbouring countries. The option of choosing a cultivar from an online seed bank is an expensive and risky route. Clones, often the choice of privileged citizens, are also expensive and very difficult to source. “Dab” culture (vapourising Cannabis extracts) does not exist and extract culture is seen as an expensive and luxurious hobby.

It is clear that if the people in Soweto want to grow and make their own Cannabis for their personal and private use, they are left with almost no means to do so. So we asked about Dagga Private Clubs. Some of them were familiar with the concept, but nobody knew about any clubs in the township. This did not surprise me as considering what I had learned by then, it seemed near impossible to even try to grow communally.

What became clear to me on this day was that privacy is not nearly enough to protect our human rights and provide access to safe, clean Cannabis. The lawmakers seem have a misunderstanding about what Dagga is and a skewed perception of privacy. This reminded me of what I read in the answering affidavits of the Haze Club case. 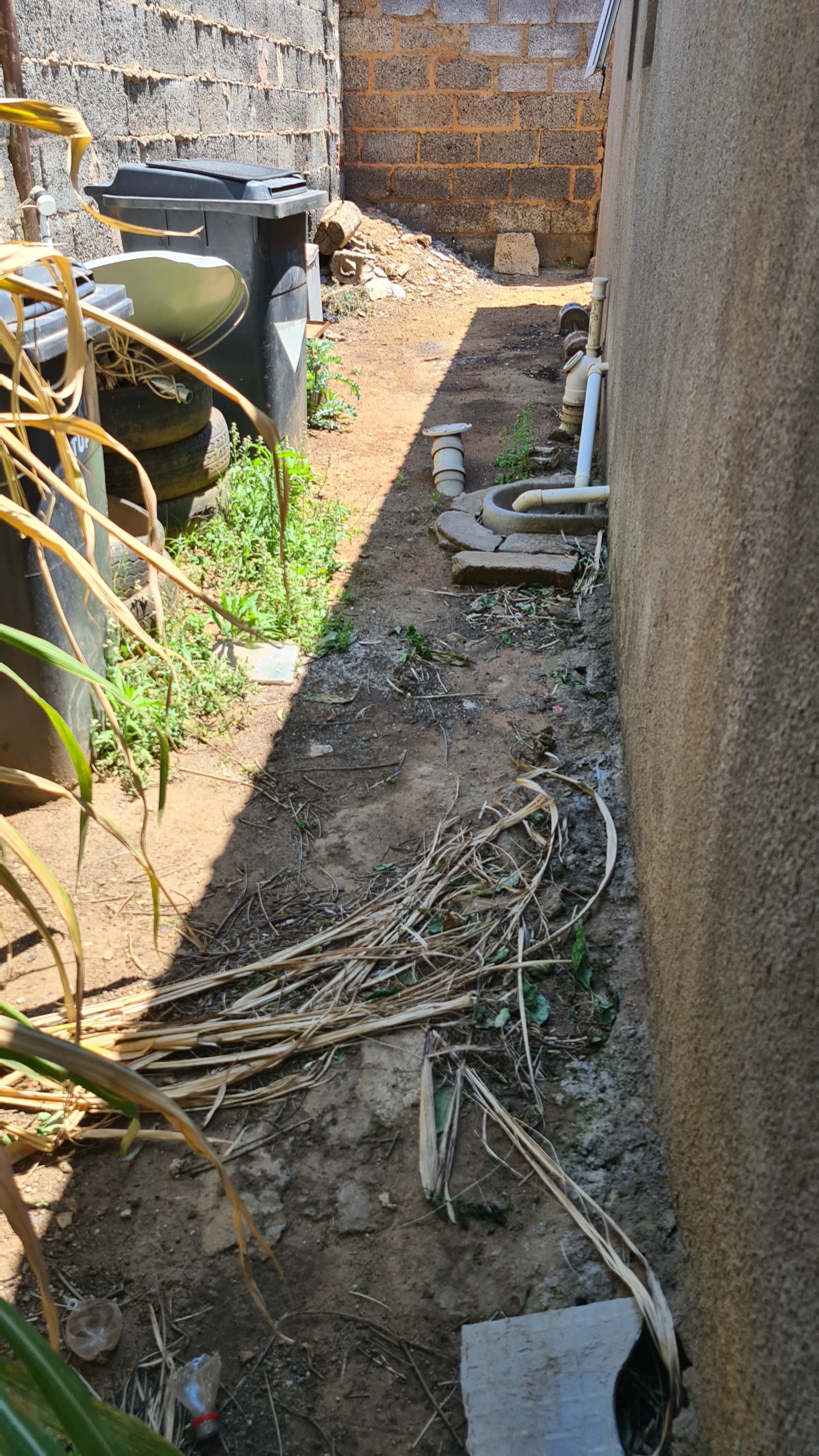 The state seems to think that “Cannabis can be grown in small spaces, including in pot plants on balconies or windowsills and in backyards of townships and informal settlements”. They were not joking, they were showing us their ignorance when it comes to Cannabis.

I am 50 years old and I have yet to see or smoke windowsill Dagga. It’s a false prohibitionist notion. You simply cannot grow two meter high trees on a windosill. Real privacy is a luxury. To rely on the “Privacy Judgment” alone is an insult to our right to equality under the South African Constitution. We are nowhere near evidence based regulations and this situation we find ourselves in continues to allow for human rights abuses of, especially, the majority of South Africans who are economically disadvantaged.

Also, in the state’s answering affidavit in The Haze Club case: “… dealing is a serious problem in this country and the dealing in Cannabis is a justifiable limitation of the right to privacy”. Well, I beg to differ. Have the respondents considered the reality on the ground? Clearly not. None of the Soweto residents we spoke to saw “dealing” as anything problematic. On the contrary, they saw it as the only way to acquire any Cannabis at all. To say that dealing is a problem is overstating the harms of what is a safe plant.

This is also echoed in the moral judgements made in the proposed, unconstitutional (in our opinion) Cannabis Masterplan: “… the illicit market – fueling a crime-prone underbelly and networks of individuals operating outside the realm of ethical and moral behaviour.”

We ended our day in Soweto with a delicious meal at a wonderfully relaxed local venue where we listened to some local jazz and chatted to the owner about Dagga!

I offer the following solutions to what I saw in Soweto:

The corrupt, ill-informed South African Police Service need to be weeded out from our Cannabis industry or at least trained to stop ALL the pointless, ongoing arrests.

Dagga private Clubs could go a long way to offer access to safe, clean Cannabis in townships and informal settlements. I do believe the system could work if somebody could just take the initiative. Clubs will provide access to safe and clean Cannabis as well as bolster local Stokvel initiatives. Even after trade in Cannabis becomes legal in South Africa, clubs could play an important role in the townships and informal settlements. The South African Cannabis community want to TRADE LEGALLY in our favorite plant and “Kasinomics” trade in the “healing of the nation” is a good thing, not a problem. Everybody is trading already, but the burden of illegality remains.

WE ARE NOT FREE UNTIL WE ARE ALL FREE! Fields of Green for ALL!