A Tale Of Perpetual Imminence

A Tale Of Perpetual Imminence 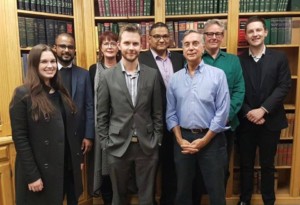 When this photo appeared on Adv. Don Mahon’s Facebook feed recently, he commented that he couldn’t believe a year had passed since it was taken.
The photo is a time capsule of the few days we had with Trial Of The Plant expert witness, Dr. Donald Abrams and was taken after we’d finally met the man for the first time.
It is quite astonishing that 12 months have passed since the TOTP and looking back on the year, it’s been a period of treading water and waiting.
Apart from being granted the opportunity to join the State’s appeal of the WCHC Davis ‘privacy’ ruling in November at the Constitutional Court, a day we’ll never forget, there has been little to report on advancements in legalisation.

There have been many interpretations of the Davis judgement, but the bottom line is, the SAPS remind us all daily that the laws haven’t changed and it’s business as usual for them until they do.
The Constitutional Court judgement is imminent. It has been for months. A perpetual imminence.
It’s like we’ve always been waiting for the bench of 10 to make their ruling, but since the 7th November 2017, a lot has happened across South Africa’s political landscape.

When we started our legal challenge we were barely two years into the Zuma presidency. We watched the country being brought to it’s financial knees by his two terms in office and now, with his successor squeezing the poor even further with VAT and fuel increases, not to mention changing the constitution to make it easier to expropriate everyone’s land, you could argue the ConCourt must be a really busy place right now.

While we are in this legal limbo we’ve been focusing our attention on helping those unfortunate enough to be caught in the ongoing brutal efforts of the cops, who never cease to amaze us with their dedication to ridding the world of Dagga and its undesirable users. The Join The Queue Arrest Helpline has never been busier with people, convinced they can now grow weed in the privacy of their homes, get arrested, charged and all their plants confiscated.

Hopefully, when the ConCourt deliver their judgement, they take into account all those South African Cannabis users who are walking around with a criminal record for using Dagga, unable to find employment in a stigmatised workplace. We also hope they recognise the Cannabis users languishing in SA jails and holding cells, only because they cannot produce any bail money to secure their freedom or do not have the resources to avoid conviction in courts who are ‘not aware’ of the ongoing Constitutional challenges.

Their plight is another form of perpetual imminence all together……