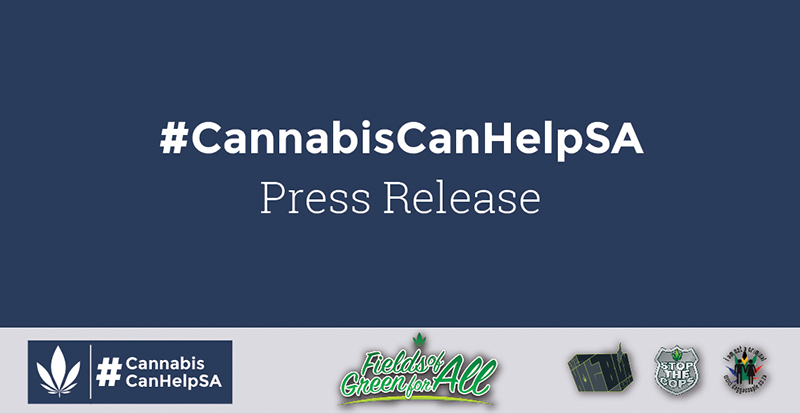 Cannabis can help the South African people and the rebuilding of our economy if it is regulated fairly and equally, for ALL South Africans.

Johannesburg, South Africa: Lockdown has been a rough ride for South Africans all over the country, having been confined to their homes for over two months without the prospect of a return to normality anytime soon.

Along with the restriction of social gatherings and non-essential movement, came a more controversial prohibition. This is, of course, the banning of alcohol and cigarettes. This unexpected, arbitrary introduction of prohibition  has created a stir amongst South Africans, with people saying that it is a “violation of human rights” to make these everyday “bad habits” illegal. Since when do prohibition work, anyway? It is no secret that the “black market” is thriving under these new laws.

This is a very familiar situation for all in the SA Cannabis community, who have been legally prohibited from using, trading & cultivating Cannabis for almost a century. Non-profit company, Fields of Green for ALL, has been fighting the legalisation battle for the use, cultivation and trade in Cannabis, for all applications, since 2010. They aim to bring about change by highlighting the economic benefits of a regulated Cannabis economy in SA, raising funds for the cause and staying at the frontline – taking action to remedy the harms prohibition, as well as promoting fair regulations that benefit our people, our environment and our economy.

2020 is a year that will (hopefully) see the South African Cannabis laws change as a result of the order of the Constitutional Court made on 18 September 2018.This was already a large step for all of those fighting the legalisation battle. However, these regulations may bring about a new set of problems; ones that organisations like Fields of Green for ALL would like to avoid. 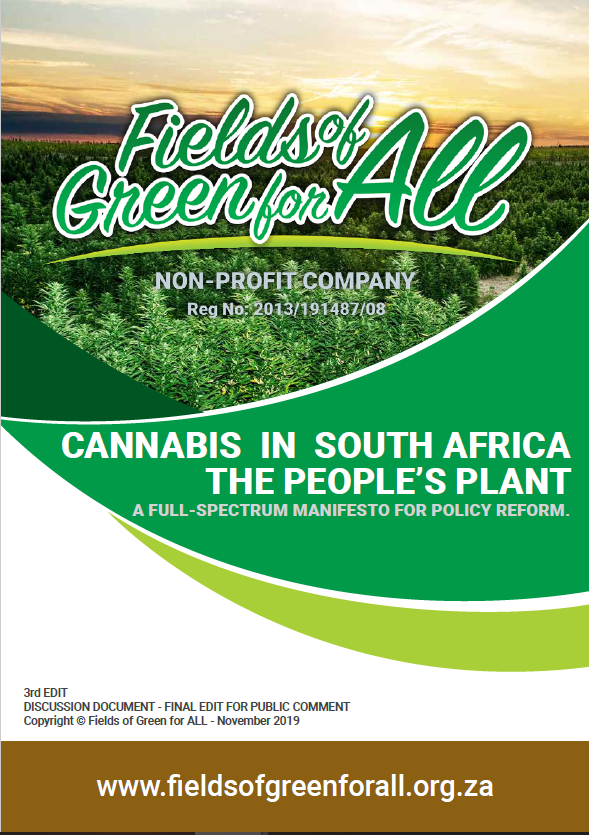 FGA has put together Cannabis in South Africa: The People’s Plant. A Full Spectrum Manifesto for Legal Regulation, a carefully curated set of guidelines for the regulation of Cannabis, in order ensure equity across the board and recognition of South Africa’s existing Cannabis market.

In current news articles, there are talks about the Cannabis industry being worth over $23 billion by 2023. While Fields of Green for ALL warns against over-inflation of the potential market figures, it follows that legalisation might  include the hefty  sin taxes looming over each sale and a ‘licensing system” which is guaranteed to be unfair, expensive and open to corruption. All of this will result in (and the continuation of) underground illegal sales due to lack of affordability, just as we have seen with alcohol and tobacco prohibition under Covid-19 lockdown regulations. Unfair regulations favouring the rich will not stop arrests and harassment of our peaceful Cannabis community by the South African Police The harms of prohibition are a far greater issue than the “good of the plant” and this is recorded in minute detail by Fields of Green for ALL’s #StopTheCops campaign.. Massive economic benefits will never be realised unless, taking into account the success and organisation of the CURRENT Cannabis industry in South Africa, fair and sustainable regulations are crafted by those entrusted with changing the law.

Fields of Green for ALL is fighting the good fight with an campaign called “#CannabisCanHelpSouthAfrica”or “CCHSA”.

The aim of the campaign is to communicate directly with government to ensure that the regulations around the law are fair for the entire South African population, and not simply another opportunity for exploitation of our people and our rersources. Fields of Green for ALL’s Manifesto will be accompanied by their Dagga Re-Legalisation Petition, showing the South African government that the community is standing together for the fair regulation of Cannabis in South Africa.

Fields of Green for ALL will stop at nothing until their Manifesto and Petition, accompanied by a widely endorsed letter, reaches the desk of President Cyril Ramaphosa, our Minister of Finance, Mr Tito Mboweni and ALL 22 government departments who MUST be involved in crafting both the laws and the regulations around Cannabis in South Africa. 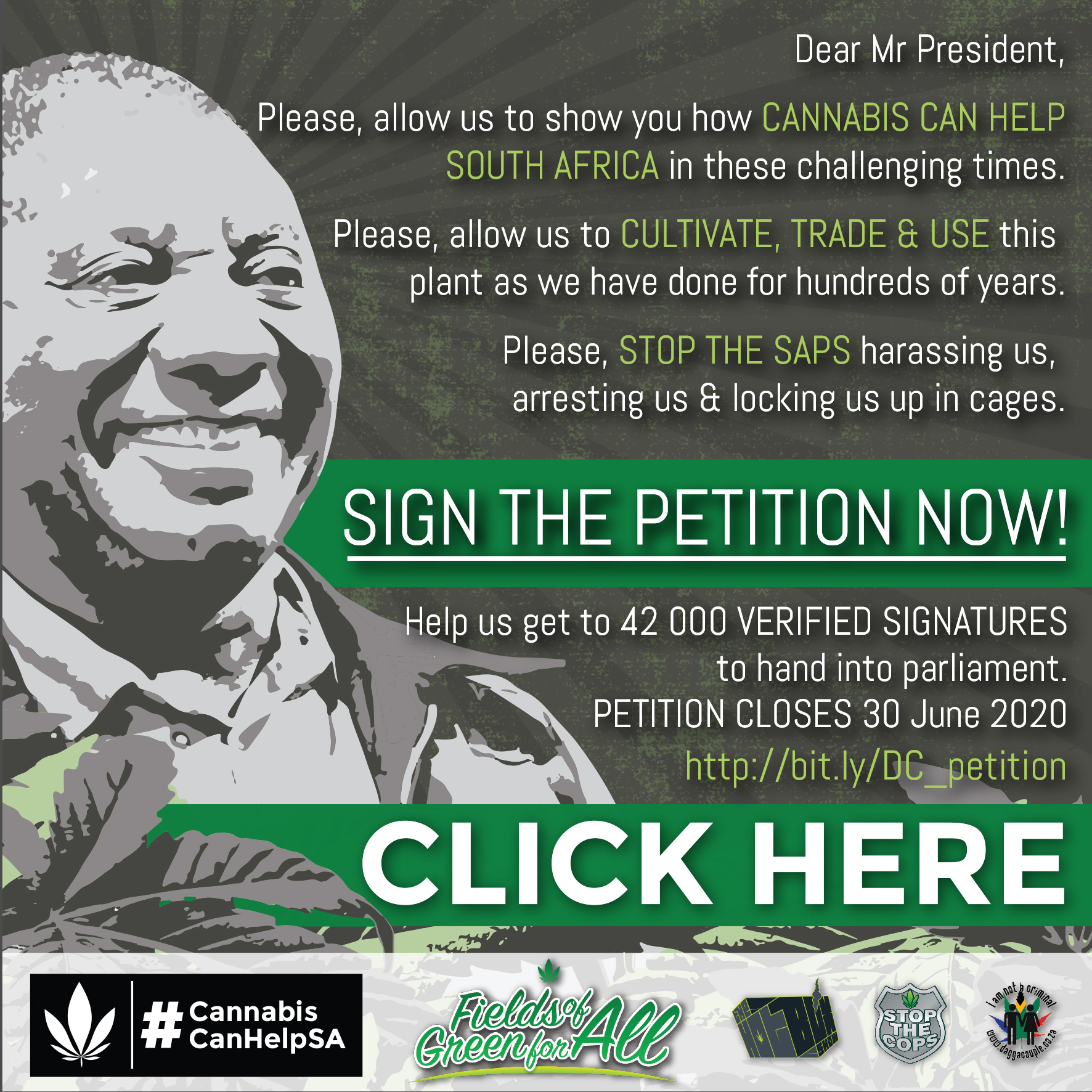 Fields of Green for ALL is appealing to the public to become part of this campaign by  downloading a  “Digital Street Team Pack” to share far and wide, and often. This is to ensure that they can get as many signatures as possible before the end of June, after which they will finalise the submission to parliament.

It is worth noting that, due to the nature of their activism, Fields of Green for ALL and The Dagga Couple have been shadow banned by Facebook and other social media outlets and this is why they require as much public participation in the campaign as possible. Their annual event – The Dday 2020 Fundraiser Festival – had to be cancelled due to Covid-19 and this campaign is an effort to keep going under these difficult circumstances.

“We would still be in the darkest days of Cannabis prohibition if it wasn’t for the everyday activism of each and every member of the South African Cannabis Community, existing and emerging businesses within the Cannabis economy and our extensive list of stakeholders who support our work.”

… says Myrtle Clarke, Founder & Director at Fields of Green for ALL. She and her team are confident that, with the help of ALL South Africans with an interest in seeing Cannabis completely legal, they will reach their goal and proceed to parliament with enough signatures to have their voices heard. To learn more about how Cannabis can help South Africa, or for more information, contact Fields of Green for ALL on their website.