Marijuana Medicine: A World Tour of the Healing and Visionary Powers of Cannabis – by Christian Rätsch

Home>Posts>Marijuana Medicine: A World Tour of the Healing and Visionary Powers of Cannabis – by Christian Rätsch
Previous
Next

Marijuana Medicine: A World Tour of the Healing and Visionary Powers of Cannabis – by Christian Rätsch 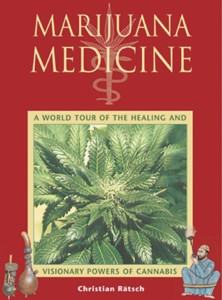 A comprehensive survey of the therapeutic, historical, and cultural uses of cannabis in traditions around the world.

• The most complete visual record of cannabis culture ever published.

• Christian Ratsch is one of the world’s foremost ethnopharmacologists and is the current president of the German Society for Ethnomedicine.

Marijuana Medicine explores the role of hemp in medicinal systems spanning the globe. Cannabis has accompanied the development of human culture from its very beginnings and can be found in the healing traditions of cultures throughout Africa, Asia, Europe, and the Americas. Even today it is an important part of many Asian healing traditions: in Ayurveda cannabis is praised for its tonic and aphrodisiac qualities and in traditional Chinese medicine it is cited as a superb antidepressant. It also remains a significant part of the healing and visionary traditions of Latin American curanderos and Brazilian, Nepalese, and Indian folk medicine. Modern research has confirmed the effectiveness of marijuana’s application in treating such diseases as asthma and glaucoma. Christian Ratsch profiles the medicinal, historical, and cultural uses of cannabis in each of these societies and medical systems, providing remedies and recipes for those interested in how cannabis can be used to treat specific conditions. – Amazon