We had nearly 50 people in the garden for an evening of documentaries, munchies and networking. It gives us a lot of pleasure to see our online community meeting each other in person after knowing each other via computer for so long.

Special thanks go to our Pretoria activists the Talibud. They singlehandedly managed to raise R440 in donations from the evenings crowd. We gave them 20 bucks back and called it R420! super cool. Well done you guys.

To all of you who helped with the gate, prepared in the kitchen, cooked some awesome brownies, arrived with scotch eggs, manned the bar and did some washing up…..we couldn’t do a night like this without you.

You know who you are. 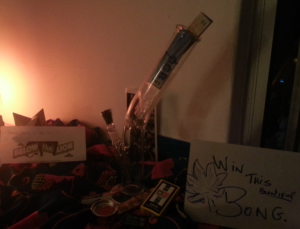 Below The Lion donated a very sexy 30cm Ice Bong for a raffle. This poorly taken photo doesn’t show the king size blades, girricks and grinder that went with the whole deal. R10 a ticket and the winner was:

An old friend of the DC won the bong. It’s noteworthy to mention he’s a South African traditional healer and didn’t waste much time in self medicating. It seems the medicine had a significant effect after such a smooth and extensive delivery.Thanks BTL for such an awesome prize.

All in all we collected just over R4000 for the evening and are really chuffed all the hard work paid off.

Why not have a movie fundraiser yourselves? get a group of your friends together – find a big screen amongst you – put some simple food together and have a jol watching some great cannabis culture information and movies. The cannabis culture is coming out of it’s shell in SA, so make a plan and meet your fellow stoners at a fundraiser in a town/city/village/kaya/church hall/sports arena/family room near you….

It’s all about the network, it’s all about the connection and it’s all about doing this together. There are LOADS and LOADS of us Dagga users in South Africa, (the vast majority we reckon) so make a difference, support the campaign, spread the word, be informed, sign the petition and do your bit. Prohibition of Dagga started here – Lets end it here.