South African Police Service: Stealing the Food off the Table

Home>Posts>South African Police Service: Stealing the Food off the Table
Previous
Next

South African Police Service: Stealing the Food off the Table 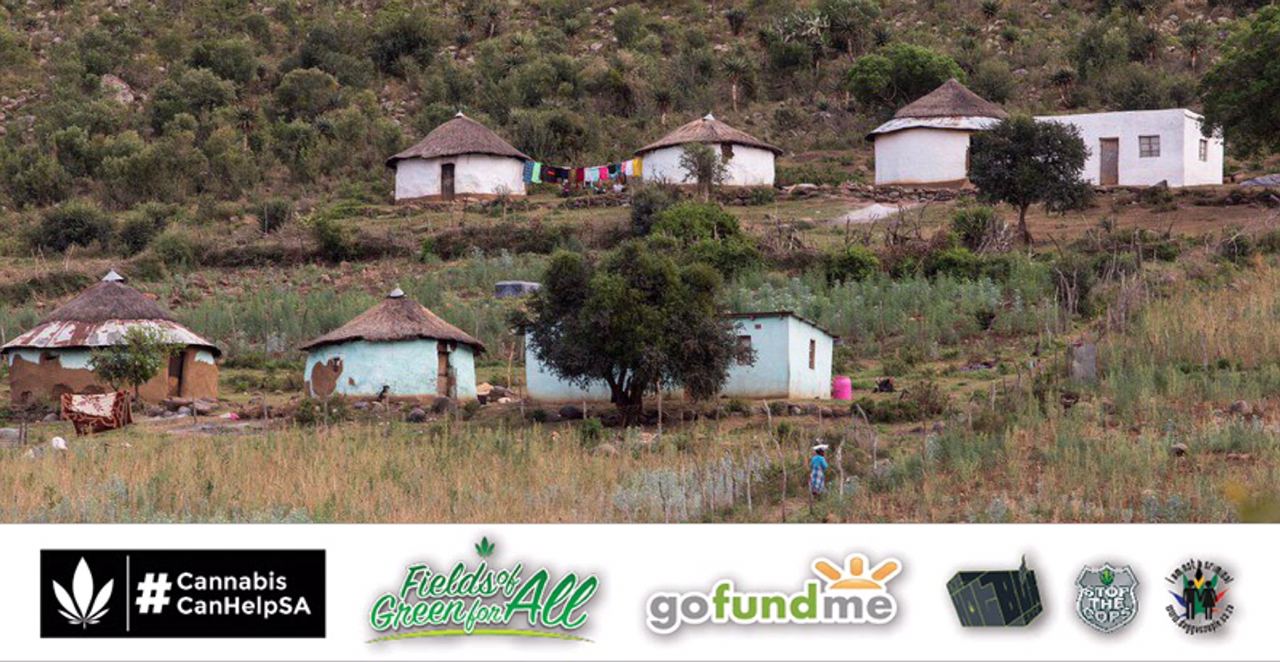 What do we mean when we say the police are stealing the food off the table? We say steal because almost all Cannabis arrests are unconstitutional and therefore unlawful. The victims are almost always innocent and their dagga, money and belongings are almost never returned. Procedures should be followed according to the SAPS‘ own directive. To us, almost ALL Dagga arrests constitute THEFT. The police hardly ever use warrants, and are NOT ALLOWED to enter or search your private property, vehicle, bag or pockets without one. Yet the police love overreacting whenever they see Cannabis and then use the drama to cover up ulterior motives and scare the victims into doing/bribing as they want them to.

The indoor grow tents that the media and police love calling ‘Hydroponic Dagga Labs’, are in fact just grow tents. A sinister overstatement that the public tend to believe if they read it enough… conjuring up images of mad scientists concocting evil drugs like Wouter Basson! In our enlightened internet age surely most of the public can see through this but, sadly, the media persists. From Algoa FM‘s stupid bust reports to EWN regurgitating the same (seemingly different) busts but in the end publishing the same hyped rehash of a flaky story, day after day after day. The ‘bales of Dagga’ we see in the news are simply part of the existing supply chain (there really is no other way to get dagga from A to B other than to transport it!!) that often sustains vulnerable communities, both rural and urban, who have no choice during these difficult times. Interrupting the supply chain has little or no effect, except for creating poverty, as you will see ex-policeman and undercover drug operative, Neil Woods, explain in his Tedx Talk at the end of this blog.

Just this week we had a police officer in Clarens in the Free State simply take Dagga and personal possessions out of a someone’s hand,  proudly pronouncing that “it is one she really likes and that she will keep it”. Just because the lady had Dagga in her hand the police officer seemed to think that this gave her the right to treat the person as less than human and steal from her.

We have spoken to a police officer in Gauteng who told us that “the powers that be” did not even bother to distribute their directives and arrest circular to every police station in the country when they were issued following the September 2018 Constitutional Court judgment. It is no wonder then that the police are still arresting South Africans daily for Dagga and almost all the arrests are unconstitutional. The police seem to be left on their own to make up and break the law as they please. Nowhere is this more evident than in the ongoing, pointless Cannabis arrests that are an insidious tool enabling bribery and corruption and perpetuating poverty.

Pondoland must be the best example of a poor rural community sustaining itself partly with Dagga. Yet our ignorant government saw it fit to send the police to spray the crops with glyphosate, a deadly poison that maims if it does not kill. The police did not just stick to the Dagga crops, but sprayed ALL the crops, including food and people working in the fields, often children. Cannabis is the only cash crop in Mkumbi, a village of about 30 households. These families are the poorest of the poor, literally feeding and schooling their children with the extra income from the Dagga next to the mielies. We would like to know where is the harm in this and how does it compare to the catastrophic harm from crop spraying? These humble folk are now also potentially excluded (together with the rest of civil society) from consultations around the draft Cannabis for Private Purposes bill.

Indeed, with every bust in the news, the South African Police are stealing the food off the table and keeping the children from school. We are waiting for the government to have a change of heart and to see Dagga as an agricultural wonder that can help support the poor and not a dangerous dependence producing substance, as stated in the severely outdated 1992 Drugs and Drug Trafficking Act. It will be a good day when those words are erased from our South African law books forever.

As I wrote recently, the police and some media platforms are closely aligned in perpetuating the stigma around Cannabis. They both make it look like they are fighting crime but, in reality, Cannabis arrests are just the opposite. The bakkies full of Dagga we see in the bust reports are transporting Dagga grown by craft growers from disadvantaged communities in rural areas. The Dagga is on its way from equally disadvantaged communities in urban areas where it gets divided up and sold to provide an income for all in the value chain. Those who do use Dagga within this value chain use it for their health or as a safe relaxant. Millions of poor people in our country do not have the land or means to cultivate their own Dagga. The government is leaving them with no choice but to participate in the the unregulated market. This is NOT “drug syndicates in action” but rather the daily unregulated supply chain where GOOD PEOPLE DISOBEY BAD LAWS! Why is this traditional, functional, vibrant part of our economy not legal and taxed like any other crop?

Featured image above: Pondoland photo by Ashraf Hendricks from Groundup

Below: Paragraph 7.6 of the police directive clearly states your Dagga must be returned if you are found not-guilty. 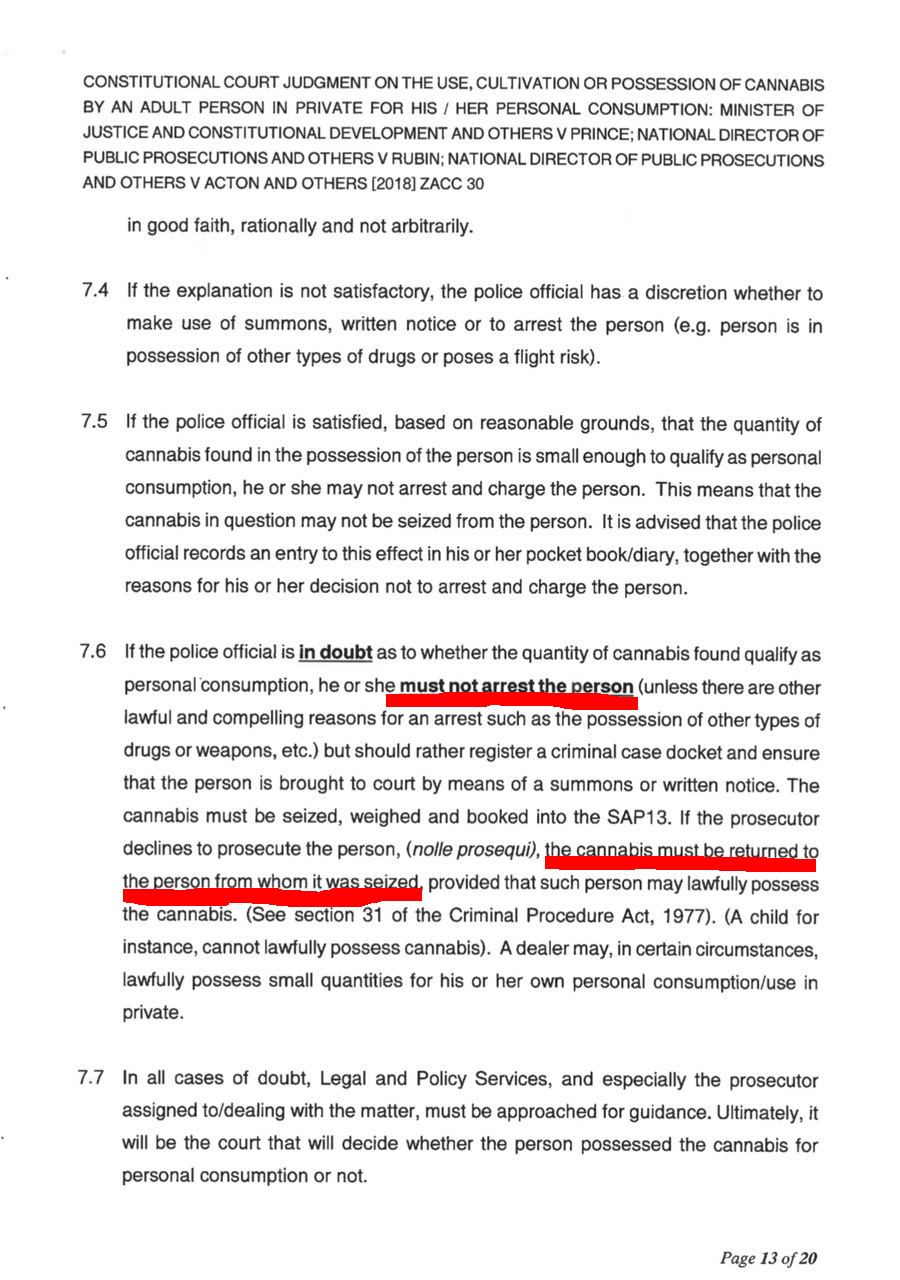 In this Tedx Talk, Ex-police officer and undercover drugs operative, Neil Woods explains how he discovered through experience that arrests NEVER benefit the victim and merely move the supply chain around which has no effect at all on reducing supply.