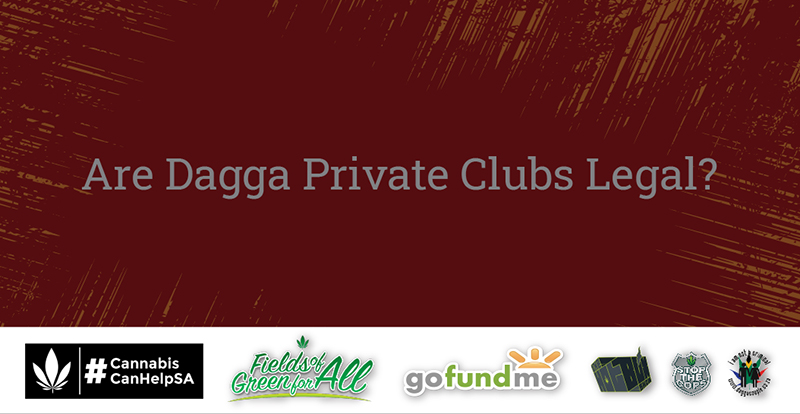 Dagga Private Clubs have been increasingly pushed into the public eye, more so with The Haze Club case pending. For many of us in the Cannabis community, breaking the law isn’t exactly a new thing. Contrary to our own view and peaceful existence, prior to 2018 we’ve been breaking the law by simply having Cannabis in our homes. Thanks to the Privacy Judgement of 2018, we are no longer criminals. But have we become too lax and inattentive? It seems like not everyone understands what “private” means and in 2020 we saw Cannabis Clubs advertise their existence far and wide to the entire country. I received more than one voice note from people exclaiming their confusion and frustration. “How can they advertise on the radio? Aren’t Dagga Private Clubs still illegal? How do they get away with it?”

Well, here’s the thing about Dagga Private Clubs and the law. Dagga Private Clubs are not legal. Dagga Private Clubs are also not illegal. This is because DPCs have evolved out of the 2018 Privacy Judgement, into something the law had not considered yet. It is a new concept that didn’t require a law about it, because it hadn’t been out there for them to know about yet. The Haze Club case will surely help us shed light on this situation, seeing as their lawyers will be seeking a Declaratory Order for The Haze Club’s Grow Club Model. In simple terms, this means that the High Court will declare the Grow Club Model in line with the Privacy Judgement, or not. The matter will then be referred back to the government for them to amend the laws accordingly.

What does this mean for existing Dagga Private Clubs?

If you are an existing Dagga Private Club, you might be concerned about what this actually means for you. What will happen to you if the police arrive at your Club with a search warrant?

You’ll still need to give them entry. Depending on the individual policeman arriving at your door (and how his day has gone before he got to you), you might get away with explaining your view and standpoint. If he’s had a good day, you might have one too. If his day has been difficult, he will transfer that difficulty over to you. You may still get arrested and detained. Your equipment and plants may still be confiscated and sometimes even distributed between the officers. You may still end up in front of a magistrate who will decide your fate.

Remember – it’s not the police’s job to find you guilty. It’s their job to decide that there might be foul play involved and then send you to a magistrate or judge to decide if he was right or wrong. The police will hardly ever listen to any reason or consider any paperwork you may have. It’s simply not part of their job to determine your fate.

What should Dagga Private Clubs do?

Make sure that you keep accurate records of the movement of Cannabis in your Club. You must be able to prove that the Cannabis was cultivated within the DPC and that it was distributed to members only – all of it.

Don’t grow too quickly! If you plan on getting to 1000 members within a year, please know that you will eventually burn your fingers. It’s difficult to prove that your community is made up of 1000 individuals all over the country, with absolutely no relation to each other besides your Club. Remember that the DPC model is not meant as a money-making scheme!

Be ready for the police. Know that they might come. Don’t try to bribe them, they will never leave you alone and you’ll descend into a very dark world you don’t really want to be part of. Let them arrest you and don’t say anything to them that might compromise your position. Have a lawyer on standby and in the know about what you’re doing, so that they can efficiently help you.

We’re hoping that the Haze Club case will offer more clarity on the legality of Dagga Private Clubs, but that might still be a few years away. In the meantime, we advise Dagga Private Clubs to rather operate as if their Club is illegal. Be careful and be quiet. Take care of your members and build a community that can stand together, until we have Fields of Green for ALL South Africans.