By Marleen Theunissen|Published On: November 6th, 2020| 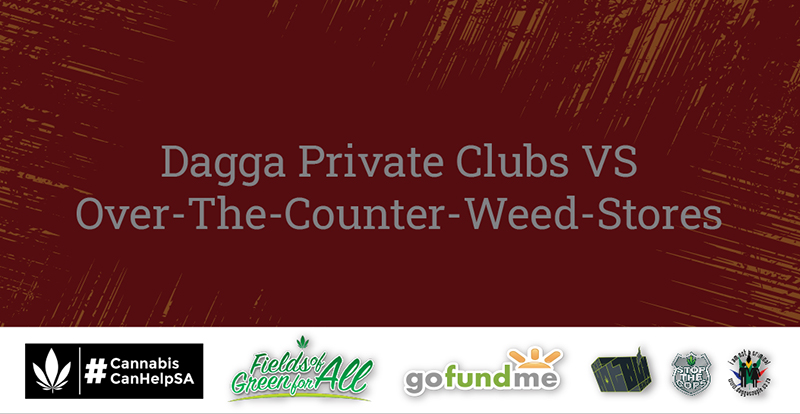 There is much confusion between operating a Dagga Private Club and opening an over-the-counter weed store. When I have a meeting with someone who wants to start a Dagga Private Club, one of the first things I ask them is “Why do you want to open a Club?” Some people are caught off guard and need a moment to think. Some stutter and don’t know what to say. And then there are some people who say: “I want to support my community.” or “We just want a consistent supply of weed between our group of stoner-friends.”

The answer I dread most is “I wanna make money.” My response to these people is that they need to wait until selling Cannabis is legal. If you want to get rich off of opening a Dagga Private Club, there’s some surprises in store. There are some fundamental differences between these two models that people love to overlook with the glimmer of the “green rush” blinding them to reason and logic.

As I’ve explained in the introduction paragraph, the main motivation behind opening a Dagga Private Club should be to provide in a need of your community. The Club must empower and educate its members and plan to produce a consistent supply of Cannabis according to the needs and preferences of its members.

The aim of an over-the-counter weed store is simply to make money. Think back to the Canapax franchise. It was a perfect example of the “dish up while it’s raining” mentality that people get when they think about the massive supposed “green rush” that will make everyone rich and solve all our problems. There are many loopholes in the current Cannabis law that people want to stretch and tear open into something it is not yet ready to be.

Dagga Private Clubs have a non-profit basis and are registered Non-profit Companies. This means that the Club should not be recording any profits, but that the money it raises from its members should just cover the cost of the Cannabis produced. It might happen that a Club records a profit. This profit needs to be reinvested back into the Club towards the improvement and development of the Club and its members. It may also choose to donate funds to its adopted cause.

Shops that sell weed over the counter (again I refer to Cannapax) are for-profit companies, registered as PTY LTD companies. In this structure, any profits raised may be spent according to the discretion of the management of that company. There is no social responsibility aspect and the main aim is making money.

In the Dagga Private Club, privacy is of the utmost importance. It is on the Constitutional Court’s Privacy Judgement that the whole concept of a Dagga Private Club is based. Therefore the DPC does not announce its existence to all who would like to hear. The members of the Club should all be people who are known to each other on some level. It’s a private community, evolving through word of mouth. If you must, compare it to a swingers club – we know they’re out there, but they don’t necessarily advertise on the radio, you know..

An over-the-counter weed store advertises its existence far and wide. It lets any member of the public onto its premises to buy and consume Cannabis. Some of them “hide” the sale of Cannabis behind grow equipment and nutrients or smoking paraphernalia. Others pack their jars to the brim, label it and display it on the counter for all to see.

The Dagga Private Club’s first task is to determine the demand of its members. Members need to declare their preference and habits to the Club so that the Club can plan accordingly to supply in the need of the member. Once the demand has been established, only then does the Club begin to plan its supply and how it will provide in the need of its members. A monthly supply limit is also strongly encouraged, to prevent any members from re-selling Cannabis they obtained from the Club. The amount that the members pay for the Cannabis they receive needs to relate directly to a costing model that monitors the production, administration and any other expenses related to growing, feeding, harvesting, processing and packaging the Cannabis. The idea is that the member covers the cost of the amount of Cannabis they receive from the Club.

The over-the-counter store buys weed in bulk (often from growers in Swaziland, who bring their entire harvests into South Africa), frequently at a mere R3 per gram and then sells it over the counter at exorbitant, inflated prices, between R40 – R70 per gram. The store has no process informing them of how much Cannabis it will need in a specific time frame – over time a pattern might appear and the shop will adjust. However, there is no planning relating to supplying in the needs of members – if a member smokes indoor strains only and the shop doesn’t have in stock, the bud tender will most likely pull up his shoulders and suggest a “really good greenhouse, it’s almost as good as indoor.” I’ve also seen some customers buying 100g or more at a time and openly saying that they’re on the way to resell the weed. Feeding the illegal market didn’t seem to be a problem for the shop owner.

Because a Dagga Private Club is a private community initiative, there is no sensibility in franchising a Club. This problem occurred quickly in South Africa, with Clubs popping up in various provinces under the same name and brand. A DPC can cater to its community, even though it stretches over the whole country. The Digital model of the Dagga Private Club sees Cannabis being shipped all over the country. If there is so much need for a Club in a specific province, assist the members there to start their own Club, to cater to their local community. The Club has to be its own legal entity, it cannot be affiliated or act as a sub-club for another Club. All Dagga Private Clubs should be independent of each other.

The owner of the over-the-counter store often starts with various franchises from the get-go. The branding might be consistent, but the weed supply surely isn’t. Like the KFC of weed, these stores pop up within 30mins’ drive of each other, but you might get better product and service from one than the other. Some stores with the same name, will sell the same strain at different prices. Yes folks, we’ve seen it happen!

A Dagga Private Club enters into a formal agreement with its members. Members need to declare their usage and preferences and sign an agreement with the Club which includes abiding by the rules and regulations, published in the Club’s Constitution document. Membership is often based on continual interaction with the Club, to ensure that members of the Club don’t take up space that could’ve been taken by a member who wants to take part and contribute. Clubs offer support to its members, even after their allocated Cannabis has been issued to them.

There are no agreements when you walk into an over-the-counter weed store. The only agreement is that you need to pay for what you want, on the spot. You are very seldom required to divulge any personal information and the bud tender is happy to weigh out your order, take your cash and wave you goodbye. To him, the interaction is over until you walk into the store again. If you get arrested with weed from the shop, there will be no support, no accountability and probably no sympathy either.

There are many people who kick against the concept of a Club. Someone recently said to us on a chat group that Fields of Green for ALL are “adamant to force our own DPC THC agenda” down their throat.  Well, no. That’s not what we’re doing. We’re actually all about opening up the plant and freeing it completely. Regardless of the fact that good people disobey bad laws, we still don’t wanna end up in jail. So, we take what we have and we make do with it and try to mold it into something that can benefit all the socio-economic classes of South Africa. We don’t want to put our precious crew or dear friends in a store where weed is sold and the Hawks could bust in at any minute. We’d much rather see them build and develop their own communities, with Cannabis being the main focus point.

After all, it should always be about the people.