Home>Posts>Exhale The Good Stuff
Previous
Next 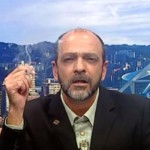 It’s certainly not the first time it’s been done around the world – but it could well be the first time a joint has been lit on South Africa’s national news carrier. After a particularly irritating few minutes with the particularly irritating David Beyever, the South African National Cannabis Working Groups’ Andre Du Plessis decided enough was enough, sparked up, and blew the smoke straight into Beyevers argument.
How many times have we felt like doing exactly the same thing after dealing with the same irritations arguing the toss with the same prohibition faces?
Of course, Du Plessis’ actions were immediately condemned by the Central Drug Authority, predictably stating this is exactly the kind of behaviour we should expect as a country if dagga were to be legalised.
Du Plessis is no stranger to unorthodox activism techniques. Last month he created another stir by handing out cannabis seeds to delegates at a medical cannabis working group in Johannesburg.
After over a decade of front line cannabis activism in SA, Du Plessis is one of the country’s foremost and experienced pro dagga speakers and has be up against Beyever on countless occasions over the years.
It’s obvious to us he has had enough of the complete lack of  action by the SA Govt in any sphere of cannabis reform and Beyevers ridiculous circular logic.
Whether you condone or condemn his actions, he’s certainly got his message across, with over 300k views already on YouTube, and as we know – there’s no such thing as bad publicity.
So Du Plessis can now put his name on the elite list of other cannabis enthusiasts to light a doob on mainstream TV such as artists, Snoop Dog  and Wiz Khalifa; entertainers Joan Rivers and Zak Galifianakis and in more sober surroundings, politicians Janusz Palikot and Martin Linder.
Mo Faya!