Feedback: Fields of Green in the Mother City

Home>Posts>Feedback: Fields of Green in the Mother City
Previous
Next

Feedback: Fields of Green in the Mother City

By Marleen Theunissen|Published On: January 29th, 2021| 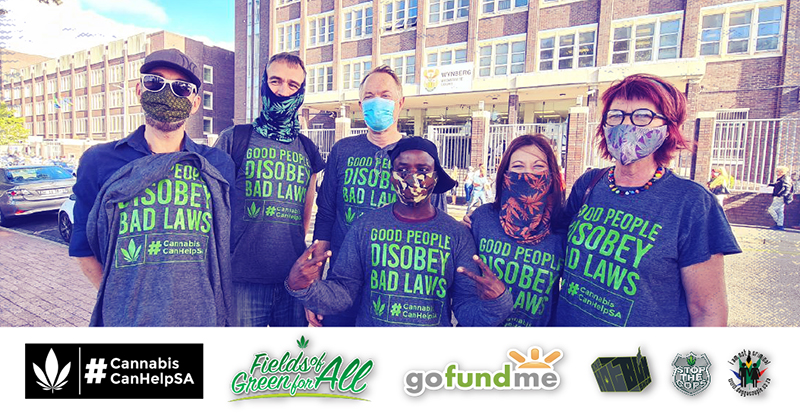 Fields of Green for ALL visited Cape Town this past week to support The Haze Club at their first appearance at the Wynberg Magistrate’s Court, and to catch up with a few of our connections and affiliates. We were unsure until the day before we left if the trip would actually happen, considering the current Covid regulations and their sudden changes. However, on Monday, 25 January, we made our way to the Mother City.

As we said, our main purpose for the visit was to support the Haze Club, which saw two men arrested in early October. We arrived at court to packed queues on the sidewalk of supposed criminals and witnesses needing to enter the court. There were easily 200 people crowded on the sidewalk; the public park across the road, closed with its gates firmly locked. We were not allowed to enter the courtroom as supporters or spectators, but luckily we met up with our friends, Trenton and Linda from Cheeba Academy who patiently waited with us outside the courthouse.

Within 2 hours, Neil from the Haze Club emerged, announcing that the state has not yet appointed a prosecutor to their case. The case was subsequently postponed to 22 April 2021. We expected something to that effect, though, as we know how lengthy and drawn out procedures get in the average magistrate’s court. It also started sinking in for Neil, who is still tight-lipped about his legal team’s strategy. Our opinion is that this will be resolved in minimum 2 years, so don’t get too excited for an answer on the legality of Dagga Private Clubs.

Talking to some spectators outside the court and throughout our visit, it’s clear that there are people who think that Dagga Private Clubs are legal. It’s really important to know that DPCs are not considered legal. There are various legal opinions that can argue to the validity of Dagga Private Clubs, but the concept has not yet been tested and declared legal – or illegal for that matter. This is what we’re hoping the Haze Club’s case will clarify!

Speaking of Dagga Private Clubs, Cape Town seems to have quite a few that are either already operating or just starting up. We visited one or two and caught up with a few people interested in getting their own DPC started. It’s great to see that there are people already doing things right (the anonymous DPC we visited) and even greater to see so much interest into the DPC model that aligns with the values we subscribe to. I still say that Dagga Private Clubs will survive for a long, long time – the Clubs who are doing it right will not be caught, because they keep their operations and existence private. If you can gain access to a so-called Dagga Private Club from the street as a normal public person, it’s not private, so don’t call it a Dagga Private Club!

Myrtle spent quite some time with Dr. Keith Scott, the Chairperson of the South African Drug Policy Initiative. Keith is a doctor who has recognized that most drug laws apply only to a specific socio-economic class of people. Take for instance the alcohol ban, recently reinstated. The wealthy and upper class can afford to stock up and probably already have a wine cellar or dedicated alcohol fridge in their house. They are mostly unaffected, albeit a bit inconvenienced. If the frustration gets too much, they have no problem turning to the same unregulated market that we were judged for frequenting. The poor man is the one who suffers, the man who can only afford to buy a beer on a Friday because that’s when he gets paid. If he has to stock up on alcohol, he won’t be able to cover his living expenses, or buy food. He also cannot afford the inflated prices of the unregulated market. Therefore, he goes to his local tavern, which of course is still operating. There he is at great risk of being bust by the cops and going to jail. The law in itself is unconstitutional and Keith is really great at understanding how this impacts ALL the people of South Africa. It’s been fascinating to pick his brain and gain a better understanding of both the unconstitutionality of the alcohol ban and the proposed Cannabis Bill.

We also caught up with some affiliates and local organizations we’re working with. Tony Budden from Hemporium hosted us with his wife Camilla at their beautiful Hemp House. Most of the house is made from Hemp and includes the walls, some of the floors, carpets, curtains and more. Their shop boasts with one of the biggest collections of hemp-manufactured products, so if you’re ever in need of any Hemp products, visit their online store!

Besides catching up at court, we also met with Trenton, Linda and Bianca from Cheeba Africa to chat about our involvement with their educational courses. The team has kicked off the year with a bang and is already scrambling to get everything in place for their new academic year. Cheeba Africa is promising to become the most comprehensive and informative Cannabis Academy in South Africa and they’re surrounding themselves with professionals from every sub-industry. We’re very excited to watch their growth and be a part of their process! Besides an addition to their Cannabis Fundamentals course, we’re also looking at some other courses the Fields of Green for ALL team can bring to the table – keep an eye out for those coming up!

The team was grateful to have been able to manage the trip down to Cape Town at all, so we were quite hesitant to fill up our schedule with loads of people. Getting into contact with too many people is strongly discouraged by our government and for once, we followed suit and kept physical visits to a minimum. It was very heartwarming though, to get to different places within Cape Town and having members of the public approach us to talk about Fields of Green for ALL, dagga in general, their struggles with the police and their struggles in life. We were saddened to see the suffering of so many and ask again that the Cannabis community soften their hearts and lend a helping hand where they can. If you cán make a difference, you should, however small it may be! At the end of the day, Fields of Green for ALL fights for the Cannabis rights of every South African, no matter who you are!