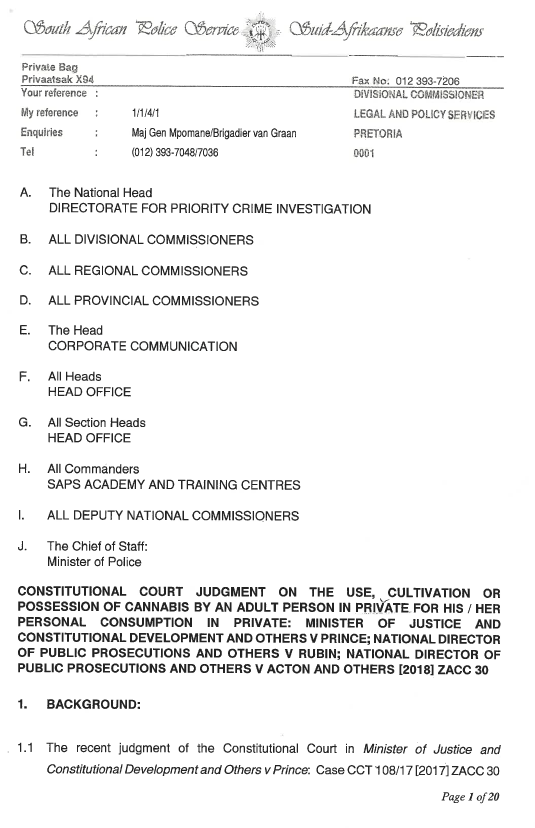 The National Commissioner of the South African Police Force, General KJ Sitole, issued a directive to the entire force with regards the Constitutional Court judgement in September 2018. The directive is not dated but it appeared on our feeds mid January 2019. We asked our legal team’s opinion and their reaction was “No surprises there!”

If you are in trouble with the law with regards a Cannabis offense and the police have not taken this directive into account, you can use it (together with the ConCourt Judgement) in your defense in court.

The National Prosecuting Authority also issued Cannabis guidelines following the judgement and these may be of interest to you and your legal team.

As far as we know, these are the ONLY two official documents to come out of government departments charged with enforcing Cannabis laws since the September judgement.

We are very aware of the “rumours” that are circulating on social media that the Hawks have been given R120million to come and find everybody and bust them! However, we can’t find anything to substantiate these claims so our answer to this remains the same:

– Stop trying to be first because everybody is first already, we are ALL winners!

– Keep your trade OFF of social media

– Don’t believe ANYTHING you hear about being able to get around the law. It is VERY difficult.

Arrests are still happening all over the country so don’t be next.