Home>Posts>Schedule, Reschedule, No Schedule.
Previous
Next 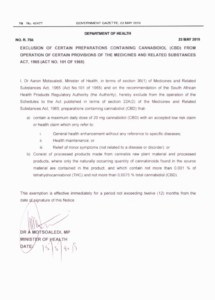 The Cannabidiol (CBD) saga continues to muddy the waters of cannabis legalisation. When we first started our legalisation challenge eight years ago, nobody had heard of CBD, and now it’s everywhere, in every product, for every ailment, for every use. Weed’s silver bullet.

We’ve always been wary of CBD. To us, it has been used as a stalling mechanism to skirt around full legalisation the world over. Prohibition governments have ‘legalised’ CBD for limited use the world over, and the headlines proclaim ‘marijuana legal in…. (insert State, Country, Province)’.
The US State of Kentucky is a classic example. Keep that nasty THC stuff illegal with all that dangerous mind altering psycho what what, and look good in the polls when CBD products are ‘legalised’, mostly before an election. The claim that THC is dangerous because it is mind altering is deeply flawed. CBD also has a ‘mind altering’ component to it. A dose of CBD most certainly alters ones consciousness. How could it not if it affects mood, pain, anxiety levels and so on?

Undoubtedly, CBD can genuinely assist in balancing the human condition, but the good cannabinoid bad cannabinoid rhetoric that has sprung up when comparing it to THC is clouding everyone’s judgment.
The case of CBD classification and legality is no more politically and control motivated than right here in South Africa.
The 1992 Drugs & Drug Trafficking Act lists all parts of the Cannabis Sativa plant, including seed and roots as a dangerous, dependence producing drug with no medical value.
It is still the law, nothing has been amended, and of course we are all waiting for parliament’s September 2020 deadline. Let’s see how the government rewrites the law to come in line with last September’s Constitutional Court judgement regarding home cultivation and use.

CBD has somehow managed to be extricated from the Act as some sort of special child with special needs. The fact that the World Health Organisation (WHO) recommended the complete rescheduling of CBD as a completely benign substance has helped, and so started the relaxations of CBD scheduling in South Africa.

CBD according to the 1992 Drugs Act is just Dagga, a schedule 7 drug, but the South Africa Health Products Regulatory Authority (SAHPRA) decided on a whim to drop the classification to schedule 4 in 2018. This made CBD available for medical research, but the consequence of this move was to make it available by doctors prescription only. This meant that local businesses like Hemporium, Clicks and Dischem had to clear their shelves of CBD products because it had become a scheduled medicine, not a health supplement.
What was the basis of the rescheduling? Where were the studies that SAHPRA based the classification on? Where were the human trials? These were all questions the Traditional & Natural Health Alliance (THNA) started to ask by way of a barrage of lawyers. SAHPRA was taken to task in an affidavit to the Pretoria High Court. “Prove the science behind the scheduling of CBD or we’ll sue the arse off you” was the message. 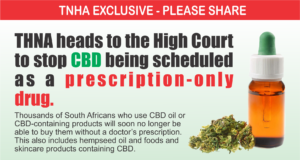 After much too-ing and fro-ing as is often the case in the build up to a major courtroom confrontation, SAHPRA finally capitulated out of court. Gone are the days of the quasi governmental Medicines Control Council (MCC) using the States lawyers to prove their point. SAHPRA, the newly formed regulatory medicines body is a registered corporation which means they now have to pay for their lawyers like everyone else. Undoubtedly this became a pivotal point for them when deciding how to tackle this potentially damning court case with a gaggle of powerful plaintiffs baying for SAHPRA blood.

This week SAHPRA capitulated and the Health Department gazetted a rescheduling of all CBD products. CBD is still in schedule 4 to the Medicines and Related Substances Act. It has however been removed from schedule 7, but is now to be considered a no claims health supplement. Really confusing, but it seems like a huge win for the TNHA and CBD, and may well usher in a more rational approach to the classification of Dagga in general.

But wait, what are those percentage figures at the end of the government gazette? A 20mg maximum daily dose is reasonable for most applications, but does it still mean risking criminalisation if someone were to imbibe more than 20mg? The figure of 0.001% THC as a maximum quantity allowed in a CBD preparation pretty much ensures than anyone cultivating their own weed for CBD preparation will find it impossible to extract a product with less than 0.001% THC. ‘Hemp’ CBD has a ceiling of 0.003%. 0.001%  means the CBD will have to be isolated by extraction with very expensive machinery to stay within the arbitrary new limit. A control mechanism if ever we saw one.
The final arbitrary figure the Dept Health came up with as their final caveat is not more than 0.0075% CBD in a total product. Can you imagine how ludicrously small that actually is? 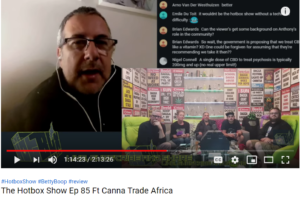 Already the press is full of misleading headlines on the subject. “Dagga ingredient CBD just became fully legal” is patently wrong and the final paragraph of the CBD gazette put a 12 month moratorium on the situation.
Good news and bad news really. As Anthony Rees, the head of THNA said in a live interview on the Hotbox Show hours after the gazette was published, it’s like walking up a down escalator. The minute we stop putting the pressure and stop walking uphill, we’ll end up at the bottom again. Two steps forward one step back. Anthony has since written a formal statement from the TNHA.

Enjoy your new found freedom to buy, sell, trade and consume CBD products………for the next twelve months. As always, we’ll keep you posted – because in this matter, the truth is always stranger than fiction.