Home>Posts>Spot The Dagga Lab
Previous
Next 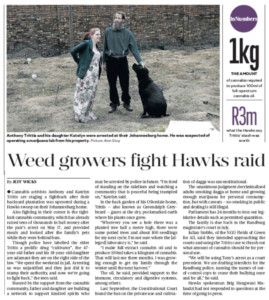 “Wherever you see a hole there was a planted tree half a metre high, there were some potted trees and 100 seedlings for my next cycle. I’m not sure where the alleged dagga lab is”
This statement to the Sunday newspapers by yet another private cannabis grower in Johannesburg highlights the twilight zone South Africa’s cannabis community find themselves in.

In September 2018, the Constitutional Court declared parts of the 1992 Drugs & Drug Trafficking Act unconstitutional in a now well publicised and far reaching judgement. South Africa’s cannabis users were effectively given a green light to grow cannabis in a private space for personal use. However, there are a  number of police stations countrywide who either didn’t get the memo, can’t read, or more likely just don’t care about the human rights of millions of SA’s cannabis using population.

For 100 years their jackboots have been booting down our doors looking for a ‘lab’, and no matter what the Judge said, some police clusters are ramping up their war on Dagga users.  Their modus operandi makes it absolutely clear to us there is no desire to obtain a conviction.

The way these raids are conducted at gunpoint, with no warrant, and the destruction of evidence in front of the home owners are a telling indication of the hatred the cops have for cannabis and cannabis users in general. In this particular instance, the homeowners plants were incinerated with diesel in front of the accused. No measuring, no forensics, no logging of evidence. Just hatred, prejudice, and the wanton destruction of private property by the Hawks. This is apart from the theft of personal belonging and cash by the uniformed police that made up part of the initial home invasion.

A prominent Sunday newspaper ran with the story. Perhaps it was because a lobby of cannabis activists and the cannabis community at large managed to fund raise over R45,000 for bail for what ended up being five detained suspects. The homeowner was charged with manufacturing three million Rand worth of weed and because of this wildly speculative and blatantly prejudiced thumb suck, bail was set at R30,000. Yes, 30k for a few rows of dagga plants in the private space of your backyard. Apart from the ludicrous bail, can you imagine what a total of six days in detention, three of which were in the notorious ‘Sun City’ awaiting trial prison outside Soweto was like?. We would suggest a frightening and filthy ordeal in such an overcrowded cesspool would be enough punishment for a few plants in the yard, but a R45k bail really twisted the police dagger in the wound. 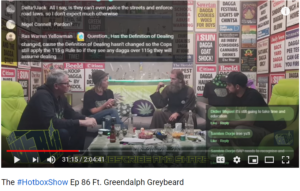 The accused have all been released. They have all had a shower to get the stench out of their clothes. Their friends and the wider cannabis community at large have ensured their is food on the table and some weed in a jar in the short term. The healing process takes long and the financial knock takes even longer. The accused in this instance, well known in Johannesburg for his big heart and open door policy for those in need, was featured on the #HotboxShow, the weekly South African Cannabis culture magazine show on YouTube. Even though his story is one of the worst we’ve ever come across, he shows no malice towards his oppressors and wants to constructively move this issue forward and take these police thugs to task.

Fields Of Green For All are already assisting with legal advice and a plan for a way forward. The police, and specifically The Hawks, simply cannot get away with such brutal and unlawful behaviour any longer.
There are meetings with legal assistance this week to take this matter to a courtroom and ensure this disgusting behaviour is highlighted and judged against. No longer can the police boot down the door and bust someone for dealing without a warrant and solid proof  of trading in Dagga.

The onus is on the cops to prove dealing, not growing a ‘lab’. We always knew the police were given sweeping powers within the ‘privacy’ judgement.

Nine months later, it is all playing out like we foresaw.