Too High to Fail: Cannabis and the New Green Economic Revolution

Home>Posts>Too High to Fail: Cannabis and the New Green Economic Revolution
Previous
Next

Too High to Fail: Cannabis and the New Green Economic Revolution 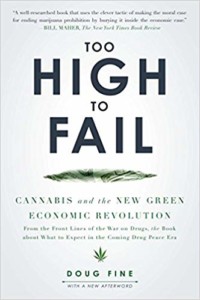 The nation’s economy is in trouble, but one cash crop has the potential to turn it around: cannabis. ABC News reports that underground cannabis industry produces $35.8 billion in annual revenues. But, thanks to Nixon and the War on Drugs, marijuana is still synonymous with heroin on the federal level even though it has won mainstream acceptance. Too High to Fail is an objectively (if humorously) reported account of how one plant can change the shape of our country, culturally, politically, and economically. It covers everything from a brief history of hemp to an insider’s perspective on a growing season in Mendocino County, where cannabis drives 80 percent of the economy. Doug Fine follows one plant from seed to patient in the first American county to fully legalize and regulate cannabis farming. He profiles a critical issue to lawmakers, media pundits, an ordinary Americans. It is a wild ride that includes college tuitions paid with cash, cannabis-friendly sheriffs, and access to the world of the emerging legitimate, taxpaying “ganjaprenneur.” – Amazon