Fields of Green for ALL Intervenes at the Constitutional Court

Fields of Green for ALL Intervenes at the Constitutional Court 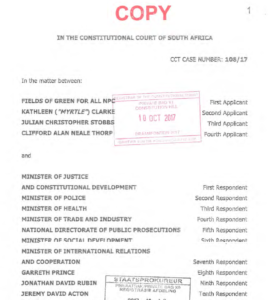 The State’s appeal  of Judge Davis’ judgement in the Western Cape High Court on 31 March 2017 will be heard in the Constitutional Court in Johannesburg on 07 November 2017. Fields of Green for ALL NPC has applied to the Chief Justice of the Republic of South Africa to be admitted as amicus curiae. In addition to this, Myrtle Clarke, Julian Stobbs and Clifford Thorp, plaintiffs in The Trial of the Plant , have applied for leave to intervene as parties in the matter.

The Dagga Couple case has run concurrently with that of Jeremy Acton, Garreth Prince et al, for the last seven years. It makes sense that, given the plaintiffs in the Western Cape High Court case are representing themselves and our legal team at Schindlers Attorneys have the weight of the evidence for The Trial of the Plant behind them, we assist in every way we can.