On Tuesday 7 November the Western Cape High Court judgement handed down in March this year will be put to the test in the Constitutional Court in Johannesburg.
Interest is mounting as we have received notice that Doctors for Life have been admitted as Amicus Curiae despite the fact that none of the parties have seen their application. Hot on the heels of our adversaries from The Trial of the Plant came leaders from the Khoi Khoi, Griqua and /Auni nations. The leaders have applied to intervene in the matter.
It is our hope that their application is successful but we could not help seeing the contrast between the doctors and the traditional leaders as something quite significant. The Dagga plant brings people together like few other things in SA but, at the same time, it becomes a very polarised debate the minute moral judgement enters the fray. DFL certainly make their stance on traditional medicine very clear on their website.

It is going to be a momentous day, please join us outside the court and be part of this historic event. The CC has only ever heard one dagga application ever – and that plaintiff is still a plaintiff in this case. Weed won’t be legalised on Tuesday 7th November, but you can thank Acton, Prince et al. for getting us all one important step closer.
The CC will recess for Christmas and we anticipate a ruling by the end of March 2018.

It is unlikely this will effect Trial Of The Plant 2, our unresolved criminal charges and those of the JTQ Stays. However, we imagine the North Gauteng High Court will be watching these proceedings closely when allocating us a new date in court, perhaps in the second half of next year.
See you outside somewhere. Wear green (whether you’re coming to court or not!) 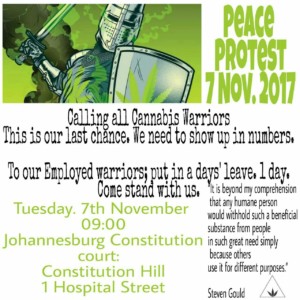